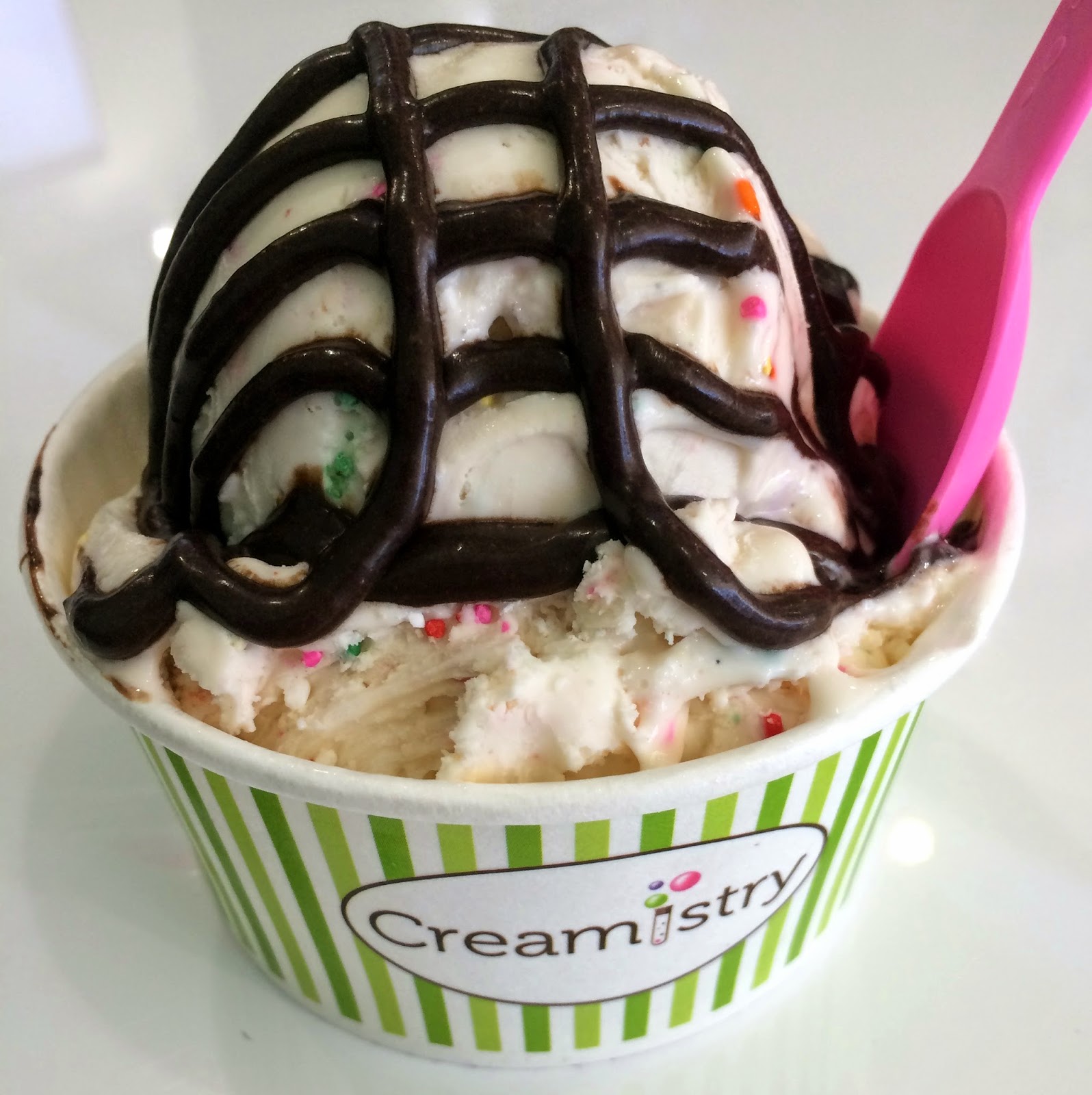 I had the opportunity to try out some ice cream at Creamistry's new location in Corona during their soft opening. I brought my mother, because she is the uncontested queen of ice cream. The lady is obsessed. I don't have much of a sweet tooth and felt I needed her expertise in the area to really get a grasp of Creamistry for my readers. I wasn't disappointed, as she was capable of dissecting every spoonful with an intelligent discourse on the merits and drawbacks of each ice cream establishment in competition with this new ice cream outpost.

No really, it was quite an intellectual debate.

Creamistry has a novel concept in that they make each batch of ice cream to order by use of liquid nitrogen. Each batch then, can be made with whatever addition you want, frozen right in with the custard base. I love their unabashed affinity for asian flavors: azuki (red) beans, black sesame, mochi, and taro are just a few of the asian-influenced flavors and topping you'll find on their menu. Other stand outs: condensed milk, nutella, and cookie butter. I wonder if anyone has calculated the combinations possible, because the list is almost overwhelming when you walk through the door.

The ice cream is almost eerily smooth. And it refuses to melt. We were there for a long time (taking pictures, going over the finer points of the ice cream industry here in Southern California) and my ice cream was still unmelted by the time I couldn't face another bite.

In comparison to other ice cream places, my mother and Mr. Mochi brought up several good points.

First, Creamistry is more expensive than Baskin Robbins or Coldstones; the base price is about a dollar more than Coldstones at $5.50. 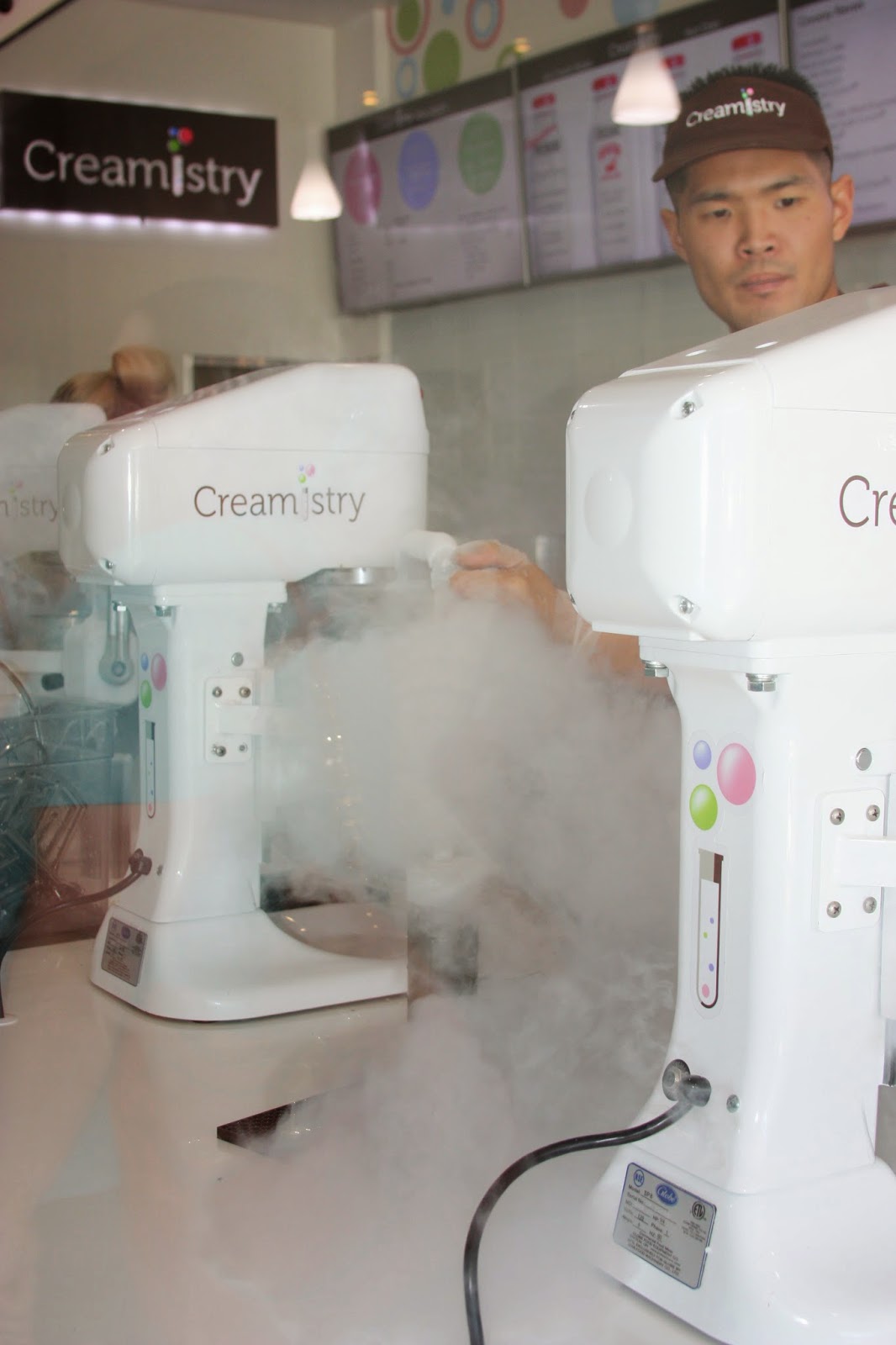 Second, the ability to customize is a selling point, along with the novelty of clouds of nitrogen puffing about the shop. But once you get past the novelty, how does it stack up to other ice cream purveyors? We all agreed that we found the ice cream superior, but if you added too many mix-ins the amazing creaminess was not as noticable. However, Mr. Mochi pointed out, even with a lot of mix-ins, Creamistry still rocked. Coldstones, for instance, has mix-ins as well, but starts melting insanely fast when you add in a lot of room-temperature items. Creamistry solves this problem by chilling everything together. I think that's definitely worth the extra dollar!

I tried the black sesame with azuki beans  and mochi on top, cookie butter with marshmallow drizzle, Mr. Mochi went for the birthday cake with chocolate drizzle, and my mother tried coffee with health bar. If you notice, the health bar was in teeny pieces. I really prefer bigger pieces of candy, but I can imagine it would be way too hard and cold by going through the nitrogen process.

All in all, I have to say the queen of ice cream enjoyed the experience. She really thought the nitrogen made a superior ice cream, and I urge you to try one without mix-ins so you can really taste how weird the ice cream feels. I mean weird in the best way, of course: rich, creamy and dense.

Disclaimer: As mentioned above, Mr. Mochi and I were invited to a complimentary tasting. However, I was not required to blog about the event, let alone paid or pressured to write a positive review. I also visited the restaurant again as a paying customer before penning this, and will be returning again soon in the future. This review reflects solely my opinions, and the prices are at the time of publication.