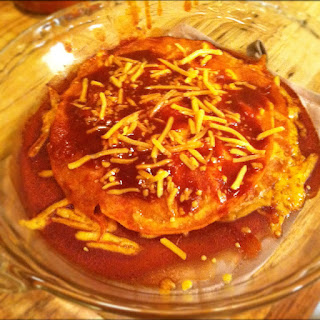 Which means that Thanksgiving at Nana's house is red and green chile New Mexican style: no beans, no ground beef. On onee side of my family, get-togethers mean sushi and mochi, whereas the other side it means corn tortillas and hatch chiles. Funnily enough, both sides will have turkey and mashed potatoes as well. Now, until I started dating, I thought EVERYONE in America ate some weird ethnic side dish at Christmas and Thanksgiving. Bringing white boys home to Grandma and Nana was interesting.

So my father, who is the last person you would expect to be cooking ethnic foods (he never cooks), surprised me. On the rare occasion growing up when mom was away and he cooked, he would whip up his favorite enchiladas since Mom didn't like the smell of the sauce lingering in her kitchen. Now I thought my dad was just a bit lazy, never rolling the enchiladas properly but stacking them like pancakes! My poor father: I always thought growing up that he just couldn't make proper enchiladas. And I laughed when he insisted that that was the way it was traditionally made ("Sure Dad, you keep telling yourself that you know how to cook!").

But eventually I learned that the flat stacked enchilada is actually a New Mexican cuisine staple. My dad still gets indignant when I share this story and I've learned to trust that he at least knows what he's talking about when it comes to enchiladas.

My challenge to you is to go over the foods you make, that someone in your family taught you perhaps, and see how your family's culture has influenced you in ways you never knew.

Preheat oven to 450 degrees Fahrenheit. Heat the oil and chile sauce in separate pans. As soon as the oil bubbles when a teeny piece of tortilla is placed in it, its ready. Fry the tortillas one by one in the oil for about 40-60 seconds each, then transfer to the pan with the hot chile sauce. Spoon approximately two tablespoons of the sauce into a bottom of an oven safe pyrex dish (or similar) and place the chile coated tortilla flat in the middle of the dish. Place a generous sprinkling of cheese as well as whatever other topping, making sure not too pile it too high. Repeat the same process for another tortilla, stacking it like a pancake onto of the first tortilla and toppings. Place more cheese and toppings on the second tortilla, and stack with one last fried and coated tortilla. Place a sprinkling of cheese atop the final tortilla and place in the oven. Repeat this process with another pyrex dish. After about 10 minutes in the oven, serve in the dish at the table. This recipe is super easy to double or triple, and different types of cheeses and sauces are welcome. I think Mole or enchilada sauce would be a nice twist on this New Mexico favorite!