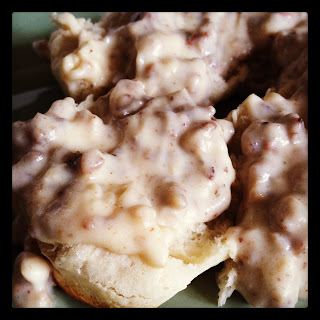 Brown sausage in skillet, do not drain fat. After sausage is well browned, add flour in two tablespoons at a time, allowing the flour to brown properly in between. You can adjust the flour, less for a thinner gravy and more for a stiffer one, but I find that 5-6 tbs of flour is my happy place. The flour will mix with the fat and stick to the bottle of the pan where it will brown but make sure the flour/fat mix doesn't burn at the bottom. This flour/fat mix is called a roux, and is what thickens the milk into gravy. If you chose to substitute a lean meat, you may want to add butter in equal portions to flour in order to make a proper gravy. Play around with it, you may be able to cut down the butter! After the gravy and flour have heated up, add in the milk and whisk, making sure to scrape the roux off the bottom of the pot. After the gravy has been bubbling for about 10 minutes, its done! Add the dried sage, salt and pepper to taste.

Gravy reheats really well, so if you're using refrigerated, pre-made biscuits, you can always make a big batch of gravy and refrigerate it, and then just pop as many biscuits as you need in the oven at a time. Microwave the gravy and spoon on top of the fresh biscuits.

Here's a picture of my Australian Shepherd, Tiara, licking the pot clean. She loves gravy time!
Posted by Miss Mochi at 7:43 PM