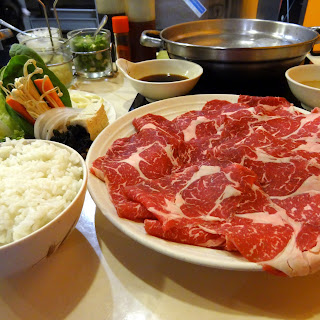 Whenever I talk about Japanese American cuisine with people unfamiliar with it, I always hope to dispel the notion that it's nothing but cold raw fish. Tell a person your family is part Japanese American, and you invariably get the awesome response:

"You guys must eat sushi every night!"

Don't get me wrong, sushi is great. But it is the tip of the iceberg; saying you love Japanese food and only knowing sushi is like claiming to love French food and only knowing their pastries. I've heard plenty of people claim to hate Japanese food because it's all cold and raw. I usually challenge them to try some yakitori or kare, but tonight I challenge you to some shabu shabu!

Shabu shabu literally means "swish swish" due to the action or sound the ingredients make as you gently swish them in boiling water. It's a one pot meal that usually involves a pot of boiling water flavored with kombu that is communally shared, while more contemporary shabu shabu places might offer heavier flavored broths. First in go the veggies (napa cabbage, carrots, mushrooms and more) because they take longer to cook. Then you take a piece of thinly shaved raw meat and swish it in the water until it turns color. Dip it in either ponzu sauce or gomadare sesame sauce, and pop it in your mouth. Make sure not to leave the veggies in too long, and pull them out and eat as your preference dictates. After you have swished to your heart's content, you can use the now very tasty broth as a base for udon soup as an end to your meal.

If you live in Southern California, there are many fine shabu shabu establishments for you to try. One such establishment I ate at recently is California Shabu-Shabu.

Once I perfect my gomadare sauce, I will have a tasty at-home shabu shabu recipe for you to try. While this proceeds, I prefer to to dine at shabu shabu restaurants. Purely for research, you see.

When I first stepped into Cal Shabu at Costa Mesa, I was surprised to see that everyone had their individual hot pot burners and sat at the long bar. I've been used to the more traditional communal pot shared with friends and family crowded around it. Quickly, I realized that having an individual hot pot meant I could bring my vegetarian friends without worry. However, it also means that it is harder to converse with a large party, and it's wise to sit next to a person well versed in shabu if you're new. Case in point: Mr. Mochi's friend sat several seats away and was gnawing on uncooked udon until I had to chastise my brother who was sitting next to him and too busy pigging out to tell him what to do.

The menu is very clever and expansive: it labels each portion by exactly how many pieces of meat you will receive, from a small 4 piece to a gigantic 33 piece meal. Large portions are nicknamed "King Kong," Godzilla," and "Donkey Kong." Available are several grades of beef (choice, prime, Kobe), chicken, salmon, pork, and shellfish. Vegetarian is another welcome option, and you can chose a combination of meats.

Mr. Mochi and I tried the "large" 12 piece choice beef ($14). Their choice grade was supposed to be leaner than their prime cuts, and priced accordingly, but I found their choice beef to be nicely marbled with fat and I don't see needing to try the prime grade any time soon.

Ponzu shoyu (ポン酢醤油), or more simply ponzu, is salty, tart, and citrusy and is a good compliment to the vegetables and beef. Their gomadare was possibly the highlight of the meal: sweet, rich, and savory. Both sauces were perfect for dunking the beef into. Since shabu shabu is cooked by you, the prepared aspects of the meal are the sauces and are probably the most telling of good vs bad shabu shabu. My favorite way to eat shabu shabu is to hold my rice bowl in my left hand while swishing and dunking with my right, so that my rice bowl can soak up any drips of sauce.

After we chomped our way through napa cabbage, carrots, broccoli, beef and tofu, we were given a bowl with udon soup concentrate which allowed us to add in our flavorful broth to dilute it to our desired strength. Adding in scallions, chili oil and our udon noodles, it made for the perfect ending to our meal.

Or at least what we thought would be the end: our server gave us free scoops of sherbert and ice cream! I tried the azuki bean and mango, and I would definitely pay for the mango again. The bright flavor was the perfect palate cleansing dessert, and for $1.95 would be a reasonable addition.

We were able to walk right up with no wait, but I know it can get pretty crowded on the weekends. They had a tabletop arcade in the waiting area I was dying to try, and I could see it being a pleasant place to wait, especially if you love Ms. Pacman as much as I do.

The decor lived up to the restaurant's name, and was very youthful Californian Asian-American: artsy and edgy, which can look a little too hipster but I assure you the shabu-shabu is just as authentic as the restaurants that have tatami mat rooms, in much more casual an atmosphere.