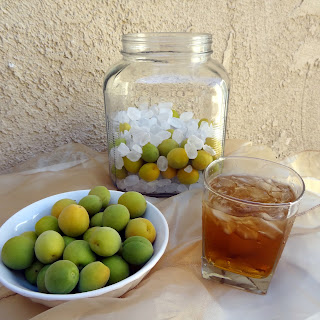 Umeshu is an infused liqueur made by steeping unripe ume in shochu with sugar. When it has matured, it is easy to drink without a lot of bite to it, especially when mixed with carbonated water. At home, it is made by combining ao-ume (青梅 literally "green/blue ume"), kouri zatou (氷砂糖 rock sugar), and shochu (焼酎white distilled Japanese liquor).

It is also super easy to make, so when ao-ume is in season around May/June, you can walk into any Japanese market and see bags of ao-ume, kouri zatou, and big bottles of shochu.

Most of the time umeshu is translated as "plum wine" but that isn't really correct. The fruit called "ume" is really a type of apricot, and the drink really is an infused liqueur rather than a wine. But just like "umeboshi" gets translated as "pickled plum," no one will fault you for calling umeshu "plum wine" but don't drink this like it is wine, because it is much higher proof!

You can apparently make this with granulated sugar, but rock sugar is preferred because it dissolves slowly in the shochu. Apparently in Japan, howaito rikaa ("white liquor" ホワイトリカ) is used instead of shochu, but it is apparently is harsher tasting, which supposedly doesn't matter because of the amount of sugar added. I'm not a fan of harsh alcohol, so I tried the shochu before making the umeshu and it wasn't too harsh. You can also use vodka or brandy. 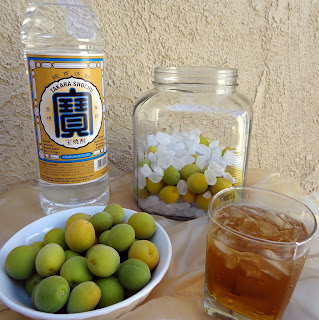 This isn't a recipe you get enjoy immediately. Umeshu becomes drinkable at 3-6 months, but really tastes better at 1-2 years. Since it's going to be sitting for a while, make sure the container is sturdy, non-metallic, and can be closed tightly. A lot of Japanese markets will sell containers especially for this purpose around this time of year.

To prepare the ume:
First, wash the ume carefully and dry them off. Use a skewer or a chopstick to remove the stem end from each ume, and look over each one for any blemishes (minor ones are fine).

To make umeshu: Clean out the container with boiling water, then dry thoroughly. Place about a third of the kouri zatou on the bottom of the container, then put a layer of ume. Alternate layers of kouri zatou and ume, and then slowly pour the shochu in, making sure that it is enough to completely submerge the rock sugar and Japanese plums. The amount of shochu doesn't need to be exact, just enough to submerge the plums completely.

The plums will discolor very fast and float to the top. The sugar will all settle to the bottom, where it will dissolve slowly. Every week or so, gently swirl the container a bit to distribute the dissolved sugar. After about 2 months, the ume will have exuded all the juice that they are going to, so you can take them out if you want, or feel free to keep them in. They will not make the umeshu bitter if you leave them in, but I like to remove the ume and pour the umeshu at this point into smaller bottles to continue aging (takes up less space!). 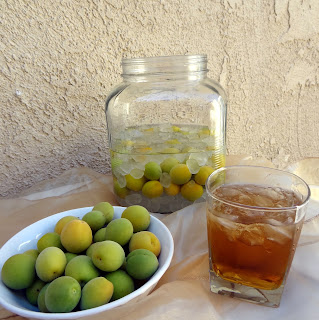