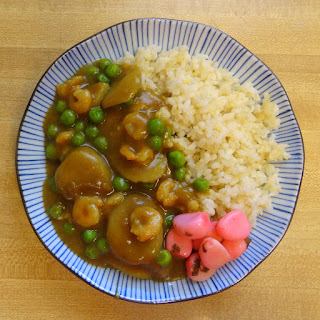 I'm guessing people who don't know me in real life probably wonder if I've died, based on the last time I posted. I've had quite the whirlwind adventure since my last post, but that's a story for another time.

Here's a pretty old recipe by this blog's standards: the original post was over four years ago! The picture was so bad it didn't even look like the finished product! So I made it again, and made sure to snap some better photos. Check it out here.

One thing I forgot to mention in the original post about the ingredients: not only are frozen peas faster than having to peel, dice, and boil potatoes, but they are much lower on the glycemic index! According to Harvard Health, russett potatoes have over eight times the glycemic load than peas per average serving. So not only is my version resourceful, but healthier!

Note on the pictures: Japanese curry seems to drink up light, and I probably should have had the curry facing the indirect sunlight rather than the rice to help lighten it up. Japanese curry just isn't the most attractive dish and I'm no expert photog. And no, a clumsy editing process did not turn that rice golden. It's haiga-mai, or half-milled rice. It cooks up similar to white rice, but it's supposedly healthier. I like its delicate sweet nutty flavor that doesn't overwhelm like brown rice can.
Posted by Miss Mochi at 5:06 PM