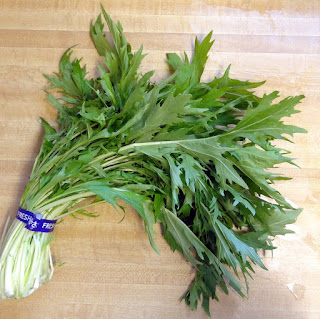 Mizuna (水菜) is a green that you will see called by a lot of different names here in the states: Japanese mustard, potherb mustard, even California peppergrass or the wildly ambiguous "Japanese greens." I like sticking to the name Mizuna because I think those other names are a bit misleading. Mizuna isn't that peppery and it's certainly not mustardy despite being in the mustard family. The name "mizuna" literally means "water greens" which refers to its juicy stems.

I'd peg the taste of mizuna as plesantly crisp, very mildly peppery (much less than arugula), with a bit of earthiness in the leaves. I'm not a fan of frisee or arugula because they tend to overwhelm so many other flavors, but I find mizuna to have just enough kick and bitterness for me. I also love that you can use the stems just as well as the leaves in most dishes without trimming as they are just as mild as the leaves.

Actually, you've probably already eaten mizuna and just not realized it! Baby mizuna is a popular green to be in a mesclun or spring salad mixture. Especially here in California, you can often find baby mizuna alongside other greens in a mixed salad.

In Japanese cooking, you will find mizuna most commonly pickled, simmered, or added to a hot pot dish rather than a salad. Now if you ever come across a recipe for a cooked mizuna dish and it seems like they got the amount wrong--they couldn't possibly mean to add that much in--don't worry as it cooks down quite a bit.

It is a very cool weather friendly plant, which is why you will see it added to a lot of hot pots. Especially in the winter months when you crave a hot pot, traditionally there weren't a lot of leafy greens to choose from.

How to use mizuna? Any way you would use arugula you can substitute mizuna (especially if you're like me and think arugula is a little too feisty sometimes). Try some tossed with balsamic vinaigrette, strawberries, crumbled feta and walnuts for a salad, or sauteed like spinach next to a roast. My mother likes to sneak all sorts of homegrown greens into her sandwiches, so I often stuff some into my Caprese Sandwich recipe. I think a BMT (bacon, mizuna, tomato) would be equally delicious!