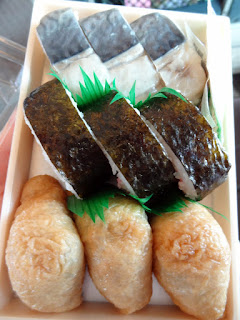 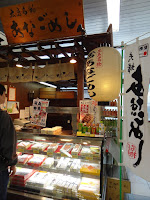 In Hiroshima, we also had our first taste of the the delight that is Japanese train stations. They have souvenir shops filled with local goods, bakeries, restaurants, ekiben shops, and more. One place even sold decorated cakes in the shape of totoro and hello kitty!

Compared to our very underdeveloped and utilitarian public transportation stops (the train station near us has a vending machine that has been vandalized and abandoned, but hey it at least has a restroom), this was a fun place to explore, people watch, and try some local food without getting lost. 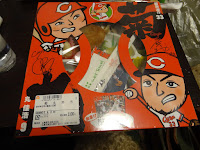 We had two ekiben in hiroshima: an anago (salt water eel) bento and a supercool Hiroshima Carps baseball bento. 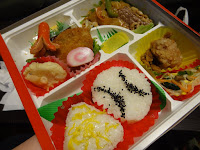 My brother and I were deeply entertained and endlessly entertained by the baseball bento, which was huge and featured a baseball decorated rice ball and even a custom kamaboko (fish cake) with the Carps symbol on it. It even came with baseball cards and a wet napkin. It was an awesome ekiben and we couldn't get over how big it was.

The anago bento was a good example of showcasing local cuisine as anago is a speciality of hiroshima, compared to the more widespread and popular fresh water eel, unagi. We enjoyed finding the ekiben that showcased the regional flavor of city we were in. Of course, you can find ekiben that aren't decorated with cartoon Carp players, but what's the fun in that? 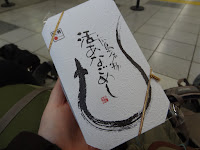 In Kyoto (to skip ahead a bit), we shared a ekiben filled with their local specialty of lightly pickled mackerel sushi, called sabazushi, in a bento that also had some complementary maki rolls and some inarizushi for a very tasty trio I featured as the top photo.

In addition to the ekiben sold outside the train, I enjoyed the fact that the train attendants sold snacks in a little cart they wheeled down the aisle. I tried some beer snacks on the way to hiroshima and they were delightful! The peanuts and slightly spicy-sweet rice crackers were nothing new, but the addition of pumpkin seeds was a novel idea! Perhaps I'll have to recreate this mix for a post? 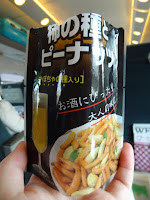 All in all, I didn't think I would have so much fun waiting at a train station, or traveling across the nation, but I certainly did! Ekiben were a great way to easily explore the unique tastes that each region boasted. We were on such a time crunch, I wish we could have gotten lost and explored some neighborhoods and tried more tiny restaurants, but this was a great way to quickly try some specialties while on a whirlwind trip.