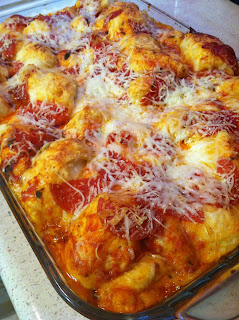 I've been having a rough week. Since I haven't been doing much other than sleeping and working, cooking has not been a top priority. But my boyfriend and I have a new no fast food rule.

Fast food is great on occasion. I will never be one to bash a juicy delicious double double, or french fries. But it should be for ultra casual get-togethers with friends, not dinners with your significant other.  Its expensive both on the wallet and waistline.

And believe me, my wallet and waistline need all the help they can get!

To the rescue: cheap and easy no brainer foods for when I'm craving something horrible.


Bubble Up Pizza is something I saw while cruising around the world wide web, looking for quick easy dinners. I had a can of biscuits leftover in the fridge with no gravy materials at hand, and was craving pizza. I am not a big eater, but my coworkers can attest that no one puts away pizza like Miss Mochi. I am a pizza fiend.

On the Pillsbury site they called this "Pepperoni Pizza Bake" but I liked the name "Bubble Up Pizza" that was on Pass The Sushi. Her pictures make it look amazing. I wish I had an oven safe skillet because it looks so cool baked in a skillet.

I put pepperonis on mine, because the boyfriend loves pepperonis. I would love to mix black olives in this, but he doesn't care for olives. Next time, too bad for him! He can pick them out and feed them to Tiara, who heartily approves of this dish. And of feeding her olives.

2 cups of shredded mozzarella (I was too lazy to measure and just poured the whole bag in... approx 8 ounces)*
1 cup of pepperonis (or olives, if you're sticking it to the boyfriend)

Preheat oven to 375 degrees Fahrenheit. If you are using the larger biscuits that come in the 16 ounce can, cut the biscuits into quarters. If using the smaller biscuits that come in the 8 ounce cans, halve them. Put in a 9x13 baking pan. Toss with half the cheese and the pizza sauce, as well as whatever toppings you choose. Sprinkle with the remainder of cheese and some more toppings. Bake approximately 25-30 minutes, or until the cheese is golden and the biscuits in the middle are no longer doughy.

*Pass the Sushi put fresh basil on hers, which sounds amazing. I didn't have any basil, but I will soon.
Posted by Miss Mochi at 11:30 PM