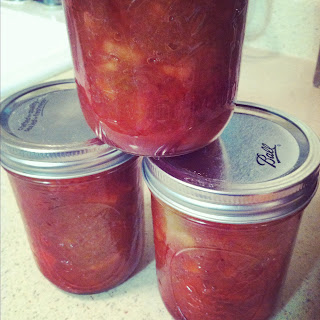 For my next installment of my kinda weekly Hapa Farm Girl edition: Strawberry Rhubarb Pie Filling. Rhubarb is a funny plant, which looks like celery only with a bit of red.

As I mentioned in my Egg Edition of Hapa Farm Girl, my parents have a partial acre that they have horses, chickens, and pooches on, in addition to an orange orchard and garden. In my teens, I planted a rhubarb crown. Now rhubarb is usually grown in places like Washington, because it needs cooler weather to thrive. Here in Southern California, it is usually grown as an annual during winter and spring because the summers and fall are too hot.

Bunking this trend is my rhubarb. Probably because he lives in a 8" deep raised bed, with his own giant leafs to keep cool, but Mr. Rhubarb is going on at least 5 years strong, and we have divided the crown to keep from crowding. The cool thing about rhubarb is you can hack the crown to keep it from crowding, and give the half crown to a friend to plant! Mr. Rhubarb is a Valentine rhubarb, known for cooking. The only thing I can say about my rhubarb versus the ones grown in Washington is that it isn't very red, except close to the crown.

Another great thing about where I live, is fresh strawberries from Manassero Farms. Unlike other farm stand or grocery store strawberries, they use Camarosa and Monterrey varieties of strawberries instead of Ventana. Ventana was developed for California in 2001 for a superior yield and and less blemished berries compared to the older Camarosa and Monterrey. However, as exciting as it sounds, they found out too late that the Ventana wasn't as awesome as expected: crops weren't as tasty. Unfortunately, it takes several years for a strawberry crop to get going, so a lot of commercial strawberries are going to stay Ventana. It's like tomatoes, if you breed for bigger yields and better storage, you seem to breed out the taste.

So a quick trip to the best strawberry stand around, then to my parents house to pick some rhubarb. Unfortunately, this recipe produces about 5 pint jars... which wont fit in my teeny excuse for a stock pot. I was going to have to borrow my mother stock pot, which I have affectionately named Big Bertha. Double the size of my stock pot, she weighs in at an astounding 15 quarts!


Chop the apples and throw into a non reactive pot with the zest and the juice, stirring to coat to keep them from discoloring. Add in the rhubarb and sugar, and heat over medium-high until mixture boils. Make sure to stir constantly. After it reaches the boiling point, reduce heat to medium and boil gently approximately 10-12 minutes until the rhubarb is soft. Put in the strawberries, and return to boil. Once the mixture has boiled again, turn off the heat and ladle into jars and process for 15 minutes in a boiling water bath.

This recipe is adapted from Ball's Complete Book of Home Preserving, edited by Judi Kingry and Lauren Devine.

The cool thing about the recipe is it lets you make a whole bunch of filling in advance to keep on your shelf, so you can use frozen puff pastry or pie crust to make a turnover or pie whenever the mood strikes you!
Posted by Miss Mochi at 4:35 PM