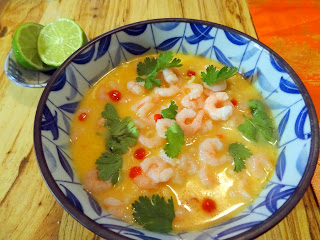 I have a confession: I love instant ramen. I know it's chock full of sodium and lacks protein, but it's also cheap and easy, not to mention totally crave-able. My grandma used to serve it for a quick lunch, with some veggies and saltines for dipping in the broth.

One thing I love more than instant ramen is ramen hacks. Simple as adding in some scallions to making a totally different style of dish, ramen hacks are fun and ingenious. My favorite quick hack is adding some fried onions and a shoyu tamago, for added protein and some crunch. Search for ramen hacks on the internet and you find that people have taken the humble noodle to great heights by adding ingredients and modifying the way it is prepared. From ramen carbonera to ramen pizza, it takes the dorm room staple to the dinner table. 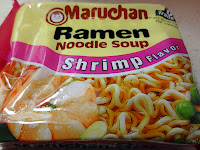 If you are looking for a comprehensive guide to ramen hacking, I strongly suggest visiting Serious Eats' ode to the instant noodle written by fellow hapa Kenji. He goes through the simple additions, like adding fish cakes (kamaboko) or sriracha, all the way to ramen poutine!

One idea he put in my head was taking the classic Thai coconut shrimp soup, tom kha goong, and making it into a ramen hack. Below is my version of the theme. 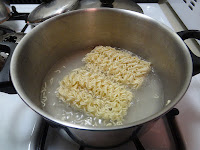 Tom kha goong: "tom" means "boiling," "kha" refers to the galangal traditionally used (a relative of ginger root), and "goong" is "shrimp." So I suppose this isn't really tom kha goong ramen because I didn't use any galangal. You can find more traditional recipes for this soup, with galangal and lemongrass, but I believe ramen hacks should be quick and easy, otherwise really what's the point of using instant ramen?

Boil the 2 cups of water in a saucepan big enough to fit the ramen block. Once boiling, put the ramen block and shrimp in and simmer for 3 minutes, stirring ocassionally to break up the noodles. After three minutes, turn off heat and add the coconut milk, sriracha, fish sauce, and half of the ramen seasoning packet. Stir well, then serve in a bowl garnished with cilantro and additional sriracha to taste. Serve with lime halves, and squeeze the lime into the soup to your liking.

For all my instant ramen lovers, here are some additional ramen hacks as well has some fun trivia!

Created by:  HackCollege.com
Posted by Miss Mochi at 5:22 PM