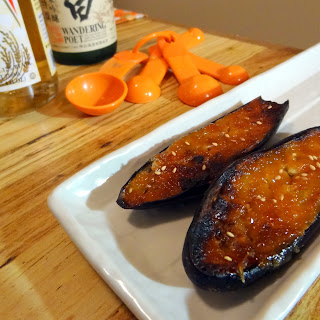 Time for another edition of Hapa Farm Girl! The nice thing about summer is the fresh veggies! My mom gave me a care package this week: 18 eggs, a bunch of shiso leaves, cherry tomatoes, and a couple Japanese eggplants.  I toyed with the idea of making a mini caprese salad with the tomatoes, some bocconcini and shiso since I don't have basil, but I ended up just eating the tomatoes on the spot from the bag. I love cherry tomatoes!

So onto the eggplant.  I have never liked the name eggplant, considering the varieties that look like eggs rarely pop up anymore.  Also know as aubergines, or in Japanese, nasu (茄子). Some funny facts about the eggplant: it is part of the nightshade family like tomatoes and potatoes, is related to the tobacco plant, and has more nicotine than any other edible plant. Still, you would have to eat 20lbs of eggplants to equal one cigarette. Wikipedia is a crazy place. 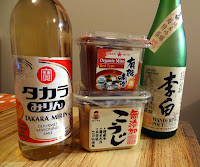 Japanese eggplants are generally very dark thin-skinned, almost black, and long and skinny.  There are round Japanese varieties but they still have the hallmark thin skin, so most Japanese eggplant dishes do not peel them. I decided to make some traditional izakaya (pub) food, nasu dengaku (茄子田楽).  For this recipe, the eggplants are split in half, grilled and then slathered with a sweet miso sauce that gets caramalized for a smooth sweet/salty/smokey snack that is delicious on its own or with rice.

Now the Japanese eggplant, like I said above, is usually prepared with the skin on, and it is firm enough that it does not need to be salted beforehand to reduce wateriness. Depending on the variety you choose, you might want to peel it and slice it into 1/2" rounds if it is too big. I think Mr. Mochi would like this better, as he did not care for skin of the eggplant (or eggplant at all actually, but we will work on this).

It's too hot right now to turn on the oven, so I experimented with using my toaster oven (which might have a better broiler than my oven, come to think of it). Putting the eggplant closest to the top element worked well, and the toaster oven nasu dengaku was easy and done in less than 15 minutes.

Cut off the tops of the eggplant and slice in half lengthwise and score the inside in a crosshatch pattern so the miso will stick, but try not to cut through the skin. Brush oil all over the eggplant. Mix the miso, mirin, sake, and sugar together. Broil the eggplant until cooked through, about 5 minutes. Spread the miso mixture on top of the eggplant slices and return to broiler for another round until the miso is caramelized but don't let it burn, about another 5 minutes. Sprinkle with sesame and serve.

This dish is traditionally grilled, so if you have a grill feel free to grill eggplant, but finish under a broiler to get the nice caramelized miso. 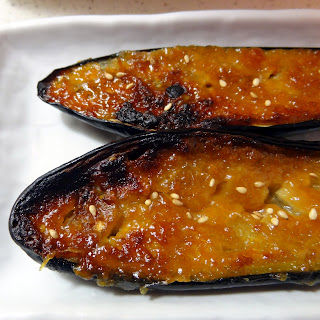