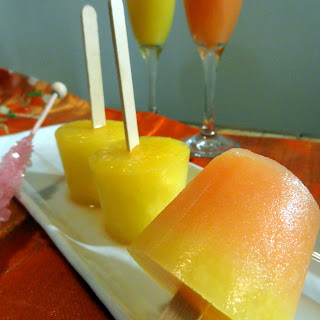 Mr. Mochi tells me I have become popsicle obsessed. Well if you were in this apartment in Southern California, you would be too. Right now, deep into August, we've been having quite the heat wave. After the kero kero pops, I decided I wanted to make another set of boozy pops.

My grandmother always used to mix soda and orange juice into a fizzy drink for us as kids. Almost like a virgin mimosa, it is still one of my favorite drink combos. I decided to make a popsicle mimosa after looking in the fridge and wondering what I was going to do with an almost full bottle of sparkling wine. Mr. Mochi is a beer fan, and I can't drink the bottle fast enough before it goes flat.

And because I am a big fan of the "oh why the hell not," I threw in a couple layers of X Rated liqueur, which one of Mr. Mochi's friends left in our fridge. X Rated is blood orange juice with mango, and passion fruit mixed with vodka. It's quite girly looking with it's bright pink color, but apparently the men are very secure in their manhood, and its pretty damn tasty.

I didn't realize it was a hip or new liqueur until I googled it for this blog post. I am so clueless when it comes to the drinking scene.


If you don't want to fuss with the graduated layers I did, you don't have to. As always, I encourage you to play around with the alcohol level to taste. The X Rated has a low enough ABV that you don't have to worry about it failing to freeze in this pop. You could even do layers of just X Rated in between the mimosa, but that would make for a very strong popsicle that would melt very fast.

Mix the orange juice and sparkling wine together, then add in X Rated liqueur to taste. Pour into 3 ounce dixie cups or popsicle molds until three quarters of the way full. Place in freezer for about an hour, then insert posicle sticks. Pour orange juice to fill the molds full to create a pretty sunrise effect. If you don't feel like layering, just mix everything together and omit layering instructions. I also did a couple with just orange juice and sparkling wine.

P.S. Damn it is hard to take pictures of popsicles in August! By the time I managed to turn all the lights on (our apartment is like a cave) they were melting!