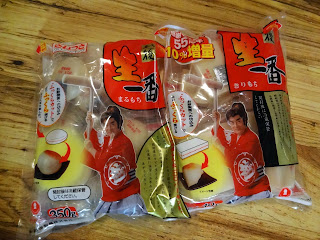 Most people are familiar with the squishy fresh mochi that surrounds ice cream. Available at Trader Joe's and every American sushi restaurant, this is usually an American's first introduction to mochi. The first time I brought mochi in for my coworkers, they were puzzled and asked me if it was real mochi, because there was no ice cream! Nowadays, they might experience mochi topping their frozen yogurt at Pinkberry and Yogurtland.

Going into a Japanese confectionery, you will see rows and rows of sweet wagashi, traditional Japanese sweets. Lightly sweetened mochi is colorful or resplendent in its natural creamy white sheen, plumped up with fruits or azuki bean paste called anko. Japanese American versions sometimes even have peanut butter in them! My favorite as a kid was the plain mochi with the pink orange and green stripes on them.

As wonderful as dessert mochi is, most of you will be surprised that there is savory mochi! Mochi without any added sweeteners, it is used in a variety of dishes, including soups.

Japanese stores sell savory mochi, dried and hard, called kirimochi and is used in the Eastern/Northern areas in Japan. A round version is called marumochi, which is popular in the Southern parts. Here in Southern California, they stock both version.

To use kirimochi, you can drop it in hot water until softened, boil it, fry it, grill it, deep-fry it, or even microwave it. It is very versatile.

Place mochi, sugar, and water into a small microwave bowl and cover tightly with saran wrap. Heat on medium power for 3 minutes. Stir until the water is completely combined. Tada! Sweet mochi dough.