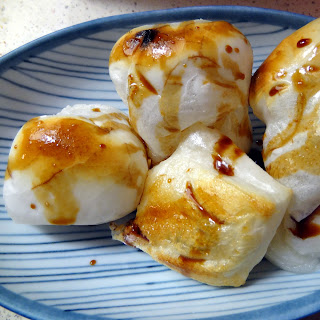 Fresh mochi is best eaten the same day it's made. Never refrigerate or freeze it, unless you want a hard rock to gnaw on. Even tightly sealed in plastic wrap or tupperware, mochi dries out fast. The exception to this is ice cream filled mochi, which is made differently to keep it soft when frozen.

Sometimes though, I need my mochi cravings fulfilled without the trials of steaming some mochiko to make mochi dough. And even that is the lazy man's way: the traditional mochi-making process takes fresh steamed sweet rice and pounds the fuck out of it with a giant mallet until it turns into a smooth glutinous mass. Yes, I know, but that required both a cuss word and some hot bolding action. Traditional mochi making is a serious back breaking multiple-person event.

Thank goodness Miss Mochi lives in this century, where mochi is not reserved just for the rich and royal and doesn't require a team of beefy men to make it. You can get dried mochi cakes at any Japanese market for cheap, as well as delicious fresh wagashi (dessert mochi) both at the markets and at Japanese confectioneries.

Well... it might actually be better for my waistline if some things weren't so plentiful and cheap, like McDonald's french fries. But that's another topic entirely.

Here's a recipe for yakimochi, or grilled mochi, that is drizzled in brown sugar and soy sauce. My mom would sometime serve this for a toasty breakfast treat! Fun fact: "yakimochi" also means "jealous" in Japanese, because of the way a person puffs up when they are jealous. I think it should be because anyone who doesn't have yakimochi would be super jealous!

You can use either kirimochi or marumochi, and you can pan fry, grill, broil, or use a toaster oven for this recipe.

This is a very homey comforting snack that goes great on cold nights with warm apple cider or tea.

4 kirimochi
1/4 cup shoyu
2-3 tbs brown sugar (or more, depending on how sweet and thick you want the sauce)

For all cooking devices, simply heat the mochi until it puffs up and turns golden brown, being careful not to burn the mochi. Depending on your preference, some people like it more or less puffy. I like mine super puffy, easily quadrupled in size, to maximize the crunchy rice cracker-like texture. My favorite method is the toaster oven, because tin foil makes for zero clean up, and you can watch it better than the broiler in the oven. Anywhere from 450-500 degrees works!

For the sauce, heat up the shoyu and brown sugar in a small saucepan over medium-low heat until the shoyu froths. Cool and pour over the puffed up mochi or pour into a shallow bowl to use as a dipping sauce. There will be leftover sauce, refrigerate until your next hot mochi craving strikes! 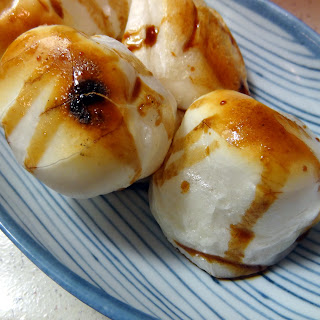