Raya at the Ritz-Carlton 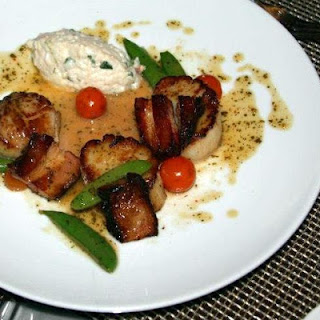 Miss Mochi goes fine dining! No seriously, its a rarity. I need a monocle and a top hat, stat.

For my dad's birthday, we went to Raya at the Laguna Niguel Ritz-Carlton, and I couldn't resist sharing everything with you. In fact, I think our waiter thought my mother was crazy, with her huge camera snapping pictures of everything.

Okay, had to get that off my chest.


Other than the aforementioned typographical error, nearly everything was flawless. From the bread to the dessert, most everything was so tasty it blew my mind. We went there last year around Christmas, and I thought maybe I was just super hungry. Nope, everything is still as wow-inducing as before.

The nice thing is all the breads we started with were gluten-free, one a nice cheese corn bread, another a spiced hard cracker-like stick, and a herb brioche. Served with creamy risotto, tomato jam, and goat butter, you would have to watch out about getting full eating too much of this. They obviously don't just serve bread as an afterthought. It's worth going there just for the bread.

We started with the mini swordfish tacos, which instead of grilled or fried chunks of fish that come to mind when you imagine a fish taco, actually had their smoked swordfish dip inside with a bit of salsa on top. Very smooth and creamy, with a nice smoked fish flavor. Their small size insured that the ratio between rich dip and crunchy tortilla was spot-on. My mother now wants to make some smoked trout dip.

The Caesar salad ($11) was a nice variation, with an abodo and garlic dressing, masa croutons, cheese crisp, and avocados. The dressing was a nice twist on the classic, but we all did not care for the croutons. Their warm, doughy and bland character seemed out of sync with the rest of the salad, rather than a nice contrast which is I am sure was the intent.

My grandmother, who I sat next to and it was easiest to steal a bite, got the seafood risotto ($35) which had smooth saffron rice with a whole plethora of fishes: Maine lobster, the biggest prawns ever, Santa Barbara mussels, calamari, dungeness crab, and some Spanish chorizo thrown in. I really liked how the individual grains of rice were not mushy and still had a chew to them, and of course all the seafood was cooked well with nothing rubbery or overcooked like prawns can become, and nothing-not the spices nor the richness-was overdone so you could appreciate the quality of the seafood.

My dish was the pan seared sea scallops ($31, first photo). The scallops were everything that scallops should be, and nothing they shouldn't. You could cut them with a spoon, soft and buttery, but with a nice flavorful crust on both sides. Not rubbery or soapy tasting, each scallop was perfectly cooked, which is very hard to with the huge scallops when the whole thing loves to dry out before it's cooked all the way. I don't even like pork belly, because usually the fat remains unrendered and flabby, but these were nicely crisped and delicious with the char sui marinade.

The problem with this dish was again in the description and the side. On the menu, it says "Pan Seared Sea Scallops – roast corn / sushi rice / nopalito /char siu pork belly / snap peas / white soy mojo." Okay... sushi rice is chubby short grained rice flavored with rice vinegar, sugar, salt, and sake served slightly warm. There was something resembling rice on my plate, but it was not sushi rice. I think they meant "short-grained japonica rice" instead of sushi rice. The roast corn and the nopales? Maybe that was what was mushed together in my weird tasting blob of deteriorating rice grains? There was definitely something vaguely green in it, but I don't remember seeing any roast corn. Now, I have no clue what "white soy mojo" is, but it sounds scary and X-rated. I am assuming it what the sauce that was on the scallops, but it was not white. Maybe it was what was binding together my rice blob? Needless to say, I loved my scallops but merely picked at my ice cold mushy rice salad.

My boyfriend had the swordfish ($30) with black bean puree and my mother had their dry-aged NY steak ($48), which were both reported as very tasty. I don't like steak, but I did steal the dungeness crab mashed potatoes and those are my new favorite mashed potatoes.

The churros for dessert were soft and pillowy, not too sweet, and served with a Kahlua pudding and coffee ice cream. The dessert sampler (not pictured) was excellent because not only did it have the stand-out churros and Kahlua pudding, but a toffee pudding cake with a delicious fall fruit compote, oatmeal cookie ice cream, and a small slice of caramel peanut chocolate tart. The tart was very rich, but still managed to be tasty and not heavy despite having a lot going on with the caramel, chocolate, and candied peanuts.

Overall, Raya's dishes were excellent, nearly without fault, and beautifully presented. The menu had the added bonus of hormone-free chicken and beef, sustainable seafood, and about half of the menu was gluten-free. While way too expensive normally for Mr. Mochi and I, for special occasions I can think of nothing better, especially around the holidays. Their giant Christmas trees made the perfect backdrop for photos and their gingerbread and candy diorama is perfect to gawk at after dinner. 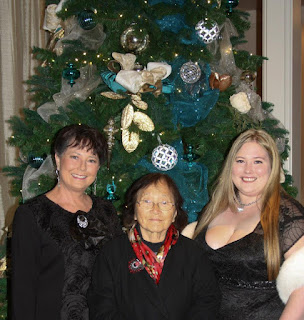 P.S. I tried on that dress with my mother on a whim. Don't try on dresses without the proper bra, like me in a sports bra. I asked my mother if she thought with a normal bra it would have too much cleavage, and she assured me it would be fine. It was quite a show.
Posted by Miss Mochi at 5:34 PM