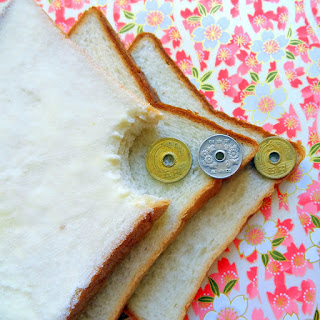 Late at night, my brother and I would wander the cities of Japan, peeking down alleys filled with laughter as the izakaya crowd were just warming up, strolling past stray cats and dark buildings with nothing but the eerily glowing vending machines in the distance to mark our path. We'd emerge on a major street, eat dinner or perhaps head to a konbini on the corner for a look around and a quick snack. Sometimes we had a destination in mind, but mostly we were just exploring.

During these explorations, I discovered my favorite konbini snack: Sugar Margarine Snack. Literally just a brick of untoasted thick-cut shokopan white bread with a smear of cold margarine, sprinkled with granulated sugar. 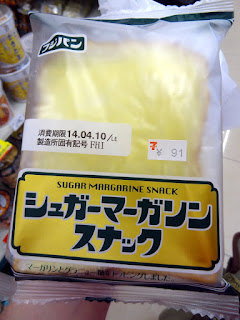 It's a snack that will horrify your mother and your dietician. But it's truly delicious and a testament to everything refined, bleached, and concocted by man.

I was in love.

I tried to find it in every city we visited, and sometimes was awarded with a slice of sweet sweet diabetes. Sometimes it would be something similar, sometimes they tried to fancy it up by toasting it, sometimes the price would be higher or lower. The cheapest I saw was ¥52, and the fanciest was ¥129, but my favorite was the original priced just under a dollar at ¥91. The others just tried too hard. 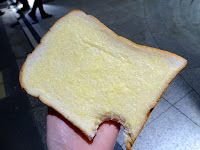 In order to recreate this recipe properly, you will need shokupan. Shokupan (食パン) is a soft pillowy bread that is slightly sweet, and manages to be soft while still having a very tight grain that has some stretch and spring to it. Honestly it's kinda like the mochi version of sandwich slices, soft but stretchy. I also like it because it's perfectly square, and you can get it cut thick. Maki from JustHungry has a great article about it here. No access to a Japanese bakery? I recommend this recipe.

Some day I'll tackle bread baking, but the day I share my slice of diabetes is not the day. 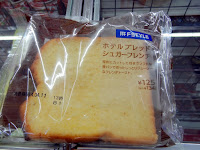 Take the thick slice of shokupan, and spread with a generous coat of margarine. If using butter, it's imperative that your butter is soft, because you want to be able to spread it without smushing the bread and since the bread is not toasted it's nice and soft. 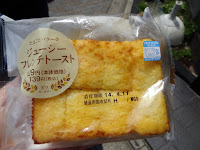 After you've fully shellacked this bitch in margarine, sprinkle completely with granulated sugar until no more margarine is visible.

Marvel in its beauty, in its lack of nutritional value, in its glorious whiteness, and take a bite. Watch out for the sugar rush.

*I washed these coins thoroughly before taking this picture, and still gave those stale slices to the chickens. Currency is dirty, food photography is funny. 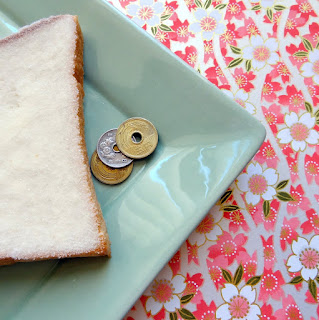