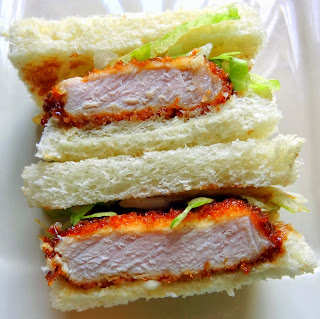 Either make the tonkatsu (instructions below), or better yet, use a pre-made frozen one that you made in advance. Since you're serving it cold or room temperature and covering it in sauce, it isn't as paramount for it to be straight out of the oil, like if you were serving it plain. If using a frozen katsu, simply toast in the oven or toaster oven at 400°F for about 5-8 minutes until crispy and warmed through. Let cool to room temperature.

To make the tonkatsu, trim the excessive fat off the pork chops and make cuts along the edge of the meat to keep it from curling. Then, either tenderize by making cuts all of the surface of the meat or giving it a couple good whacks with a meat mallet. Season with salt and pepper, then dredge in the following order: flour, egg, then panko crumbs. Make sure the pork is completely coated, paying attention to the edge of the cutlet. Pour the oil into a saucepan, you only need about 1.5-2" of oil. Heat the oil to 350°F and fry the cutlets, turning occasionally, about 4 minutes total. If it's a small pan, fry one piece at a time or two, don't crowd the pieces or the temperature of the oil will plummet. After the panko is a rich golden brown, remove cutlet from oil and drain on a wire rack. Let cool to room temperature. 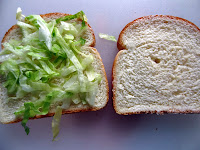 Spread mayo thinly on both slices. Top one slice with the tonkatsu, then drizzle so-su on the tonkatsu, as little or as much to your liking. Follow with your preferred amount of shredded cabbage or lettuce, then the second slice of bread. For the most Japanese, who for whatever reason love sando crustless, cut off the crusts and cut sandwich in half. Makes one sandwich. 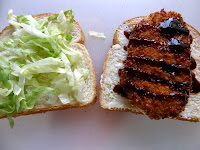 If you don't have access to shokupan: I recommend toasting normal white bread, so that it's not so soft. You could also get a bakery loaf that has a thicker slice and more hefty crumb. Alternatively, if you want to keep the bread ultra-soft and don't want to toast it, cut the bread in half and cut the crust off before assembling the sandwich. If you cut the tonkatsu in half ahead of assembly as well, then when you put it all together you won't have to cut through the whole sandwich, preventing the bread from getting flattened. 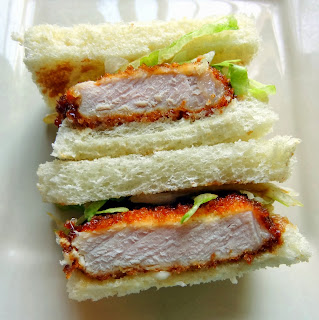