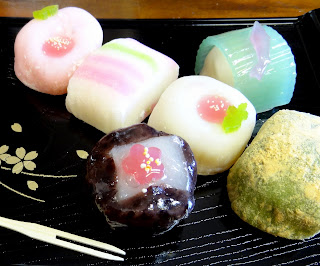 Here in Southern California, there are a lot of Japanese markets, but I still love making the trip to Little Tokyo in downtown Los Angeles for the history as well as the shopping. Even better is when my cousin is in town and she wants to go see some Los Angeles sights.

Nestled in the heart of Los Angeles, next to the police station and close to Union Station, what is left of Little Tokyo can be found in roughly five large city blocks. It is bounded on the west by Los Angeles Street, on the east by Alameda Street, on the south by 3rd Street, and on the north by First Street, but also includes a substantial portion of the block north of First and west of Alameda, location of the Japanese American National Museum, the Go For Broke Monument, and a row of historic shops which lines the north side of First Street. 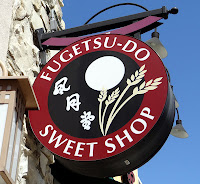 
Fugetsu-Do was founded in 1903, by the Kito family. First started by Seiichi Kito, then managed by son Roy Kito, and today his son Brian Kito manages it.  Fugetsu-Do makes delicious mochi and manju, fresh every day. One of my favorite childhood memories would be when my grandmother would come home from Little Tokyo with a box of mochi and some sort of little present for me and my brother. It is very old, the oldest business in Little Tokyo. In fact, it is so old Fugetsu-Do is one of JA bakeries claiming the rights to invention of the fortune cookie! Yes, people do not know who first made the modern fortune cookie, but history does know that it was a mochi confectionery in California (in LA or San Fran).

I love the interior, which Mr. Kito has described as outdated, but to me it is everything I want in a mochi shop, with natural wood shelves hand-built after the Japanese returned to Los Angeles. No plastic, no metal, just homey and real. In one corner it has an old fashioned soda fountain, but I hardly notice that. My eye is on the prize: as I walk in, the left hand counter holds the mochi. Behind glass are these soft pillowy jewels, half art-half dessert.

I had to bring home a box for my mother. In her words, Fugetsu-Do manages to get the perfect level of sweetness: never cloying sweet like some, rather the sugar brings out the natural sweetness of the rice.

Since one cannot live on mochi alone (believe me, I've done the research) my cousin and I toodled over to eat some ramen at Shin-Sen-Gumi Hakata Ramen. Hakata Ramen is built upon a pork based broth called tonkotsu, and is named after the region where it was popularized. If you are thinking, "eww college food," get your ass off the computer seat and go get some ramen from a ramen-ya right now. It is amazing and worlds above instant ramen. My favorite thing about Shin-Sen-Gumi is that you can order extras for your ramen, like a soy flavored egg, or crispy fried onions, or pork belly.

Whew, just had to get that off my chest. Anyways, I also ordered their creamy croquette (kani kurimu korokke) which is so good I think I could eat just several plates of that. I've also had their takoyaki, gyoza, and spam musubi, which have all been great. *To be honest, I don't like tako, but Mr. Mochi says their takoyaki is excellent. They also have happy hour dollar draft Kirin Ichiban, which is awesome and one of my favorite beers on tap. Disclaimer: I am not a drinker, and have like no opinion on beer really, but it tastes good and it comes with a cute dragon on the glass for only a dollar. Win-win, right?

I've been to both the Little Tokyo and Fountain Valley locations, and both places have excellent service and food, but Little Tokyo's ambiance is very impressive, with beautiful pictures of Japan all around the walls, and a chandelier made out of light bulbs and ramen noodle strainers. The Fountain Valley outpost is tiny and pretty much a plain white box of ramen goodness... great for watching them cook but pretty boring decor. Obviously decor is probably lower on Miss Mochi's requirement than the type of pen they give me to sign the check, but if it matters to you, go to Little Tokyo. *As long as the pen kinda works, its all good.