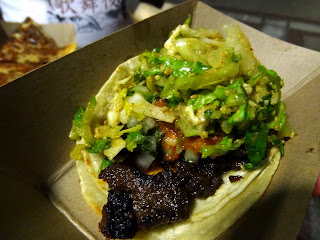 One of my favorite puppy friendly venues are food trucks, because they are always outside and a perfect way to get your dog used to dining with you. Since you can eat standing, even disobedient dogs can't snab food! Of course, there's no dog menu, so bring some biscuits or snacks unless you want your pooch drooling on your feet...

As my next feature for Dog Days of Summer, I picked to review my fave hapa truck, Kogi. Okay, I may be using the term "hapa" loosely here, but I think Kogi is pretty hapa. It takes something Asian and mixes it with a different culture, in Kogi's case, Mexi-American Southern Californian food.

Kogi started around Thanksgiving in 2008, and basically became one of the ambassadors of the new food truck craze, where "roach coaches" have been elevated into a culinary art form, and chefs can create delicious meals on wheels. In fact, Kogi received a Bon Appétit Award in 2009 and "Best New Chef" for chief chef Roy Choi by Food & Wine in 2010, proving that just because you chug around Southern California in a truck doesn't mean your food is going unnoticed.

Their pièce de résistance is their tacos ($2.29), pictured up top, where bulgolgi beef, pork, calamari ($1 more), chicken or tofu is topped with sesame salsa roja and a mix of crisp lettuce and cabbage tossed a chili/soy sauce. Nestled on top of two corn tortillas, they also have an addictive cilantro green onion and lime relish, crushed sesame, and a sprinkling of sea salt. Sounds like a lot? It is, but trust me, dig in. I am pretty picky and generally don't like cabbage or lettuce on tacos (it's just boring wilting filler usually!) but I devour these tacos completely as is and I urge you to do the same.

Their Blue Moon Mulita ($3.29) is cheese, grilled onions, and chicken sandwiched in between two toasted corn tortillas, topped with Kogi's salsa azul and crushed sesame seeds. We kept forgetting the name, and nicknamed it the "purple monster." It is delicious and surprisingly filling for the size, and the salsa azul and sesame seeds come together in a sauce that I want to put on everything.

Moving on to the Sweet Chili Chicken Quesadilla ($8), which might be my favorite thing on the menu. It has caramelized onions, chicken, jack and cheddar cheese between flour tortillas. But what puts it into drool territory is their salsa naranja, which is both sweet and spicy, tangy and bold. To top it all off, crushed sesame seeds add the perfect touch. The Black Jack Quesadilla ($8) is similar, except it uses the spicy pork and a spicier citrus-jalapeno salsa verde. All of these salsas and sesame seeds worked so well together it makes me want to put sesame seeds on all my Mexican dishes.

We also tried the burritos, sliders and the hot dog, but everyone agreed that they were just bigger versions of the tacos as far as taste and feel. Just as good, don't get me wrong.

The dessert that I tried was the Sriracha bar ($4) which doesn't look like much. It comes wrapped in tinfoil, which is a surefire way to look unappealing in my opinion. But after you unwrap and bite in, you won't care about that anymore. You will probably drop the foil in reverence. On a base of chocolate crisp like a Crunch Bar, there is peanuts and caramel and chocolate ganache flavored with sriracha, all cloaked in a robe of chocolate. It's not spicy, just enough sriracha to warm and bring out the depth of the chocolate and add a contrast to the sweet caramel. It's so good, I am trying to make a copy cat recipe so I can make it en mass.

Eat this, and you can understand why Kogi started the food truck trend.

My only problem with any trend, is the snooty hipsters that come along with it, the "I liked it before it was cool" sort that thinks being enthusiastic is a crime. Case in point: I tried the sriracha bar for the first time, and my friends asked how I liked it. I told them it was awesome (just awesome, none of my usual hyperbole), and a group in line turned around and sneered,

Y'know what, fuck you hipsters. Not only do you annoy Miss Mochi, but you annoy Kogi too. Good food is meant to be shared with laughter and friends, and I think a taco truck that pulls up at 9:30 p.m. next to a bar gets that idea. Alice Shin, one of the blogging voices of the Kogi truck, confirmed this on Serious Eats:

"There’s definitely something considered the Kogi Vibe. You’ll find it in Venice, Silverlake, or even Little Tokyo. It's when people don't just come for the food, but they come for a good time. They actually talk to the people in line, flirt, get rejected, or make new friends. Some of them come with lawn chairs and most don’t mind squatting with a bunch of people to enjoy their food. They say hi to Roy or know that the name of the person writing up their tickets is Eric.

But then there are other locations, which will remain nameless, brimming with people who come to our truck because it’s the cool thing to do this month. Because it was mentioned in LA Weekly and Good Food. So they come in droves with a list of impossible expectations for a $2 taco and a mouthful of complaints for every little detail—from the wait to the, 'Your ticket system makes no sense,' to the, 'Where am I supposed to eat these?' to the, 'This is what the hype is all about?' So THAT’s not pretty damn cool. It’s not really cool at all."

I have to say she was probably talking about some Orange County locations when she wouldn't name names, because I certainly experienced the latter people. In fact, everyone got their food and left! But you know Miss Mochi only rolls with fun and happy people, who had no problem sitting on a curb next to the truck tasting nearly everything on the menu, having a good time and saying fuck hipsters. I encourage you to do the same, because the food is amazing.