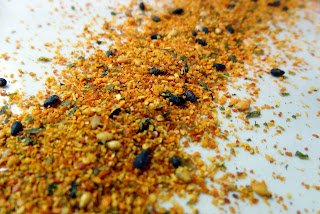 While I was reviewing my earlier posts, I realized I mentioned shichimi togarashi but didn't discuss it, even using it in my katsu-karē and spam musubi.  Like shiso and shiso katsuo ninniku, it is something that I consider pantry staples but might not be as ubiquitous as I think it is. Sounds like a perfect blog post to me!

Shichimi togarashi generally finds its home in Japanese cooking as a table side condiment, sprinkled over grilled meats, soups like udon or ramen, and rice dishes like karē-raisu and donburi bowls.  I love the way the orange peel and nori work together, since they are not what I would think of as typical sidekicks, but they work together to really make meat shine.

Japanese food stresses the freshness and simplicity of cooking and ingredients alike, so grilled meats are usually not doctored up to the extent of western grilling (helloooo barbeque sauce!), so a sprinkle of shichimi togarashi should never be so strong as to overwhelm the meat, but to raise it to a different level.

Shichimi togarashi is pretty spicy compared to most traditional Japanese preparations, considering that "hot" instant Japanese curry roux is laughably mild, and the Japanese took mapo tofu with its traditionally blazingly hot Szechuan peppers and made a huggable comfort food version. However, since shichimi togarashi is used sparingly it is not something even heat-haters should fear. Try it on burgers and fries, even pizza, it is something that is delicious and addicting.

A note on the thumb: I cut myself with a knife. Usually it is a cat scratch or bite from work, but this time it is cooking related!