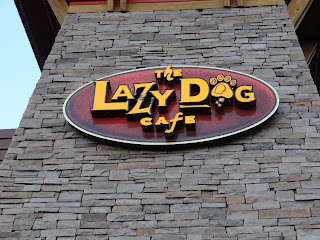 Lazy Dog Cafe was our first stop in our blog series focusing on dog friendly venues. My boyfriend heartily recommends Lazy Dog, he likes the variety of the menu as well as the big screens to watch his sports. He and his father go there for outings.

I like the comfy Adirondack chairs for lounging outside with my dog, as well as their enthusiasm for my dog. Love me, love my dog. Fawn over how adorable my pooch is, even better.  But really, you can tell that the servers actually do like dogs, even remembering my dog's name when they returned to refill our drinks.


Speaking of drinks, Lazy Dog gets a thumbs up for its drink selection. The boyfriend always goes for the strawberry lemonade ($3.95) which has real muddled strawberries in it as well as a sugar rimmed glass with a lemon garnish, no fake pink lemonade poseur here. To boot, free refill, which is awesome considering he downed probably three or four of them.  They also have craft beer, which he says is also very good, as well as three types of sangria and tons of mixed drinks. I went with the Tyler Woods, which is a variation on the Arnold Palmer that includes cranberry juice for a dollar less at $2.95.

One of my favorite things about Lazy Dog is their prices. For our appetizer, we got their flat bread for $3.95! It was tasty, with good cheese that's never too greasy, but I really recommend the hummus trio which comes with flat bread. Also, their Cajun fries are amazing and puts Five Guys to shame, never overly salty but with a sweet kick.

Another example is their side salad. For an extra $2.95 you get a salad that is huge.  Big enough to split, or a second meal. And not too shabby either. I usually treat side salads with disdain, with their skimpy dressing and wilted leaves, croutons and tomatoes added just as an afterthought, but the boyfriend's Caesar salad was loaded with goodies. I prefer my Caesar dressing with more anchovy kick, but this one was nice and creamy nonetheless.

I got their three cheese pizza with basil ($9.95). I love thin crust pizza, and this one did not disappoint. I've been to Lazy Dog a couple times and kinda bounced around the menu, but now I am hooked and know what I am getting every time. Despite no wood burning oven to be seen, this pizza had a nice char on the bottom with plenty of bubble action in the dough. But the sauce was the star. It married the cheese and basil, bright and acid without being overbearing.

The boy got their Buffalo Chicken Sandwich with the aforementioned ($7.95) delish Cajun fries.  He loves the coleslaw that literally spills out of the burger. I ate a lot of his fries while he wasn't paying attention, having lapsed into a blissful food coma.

There's no doggie menu, but there's a kid's menu that has grilled chicken, and Tiara loved it.  The pictures are from when Tiara wasn't with us, so we were inside.

There is a new location opening in Brea, but we went to the Orange location.