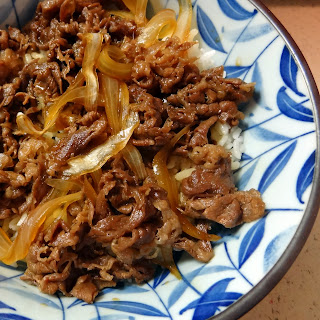 Gyudon is a relative newcomer to the donburi scene. Because of the era of Nara Buddhist rule, beef was outlawed from being consumed for over a thousand years until the Meiji Restoration. In fact, all four legged creatures were illegal to slaughter for food, partly because of Buddhist beliefs, but also to protect necessary draught animals during famine.

But with the push for more Western ideas, the Meiji Restoration lifted the ban on beef and pork consumption. Even then, beef was a bit of a luxury, due to the lack of land in Japan and the need for the cattle to help with rice cultivation. After rice cultivation was mechanized in the 1950s, cattle were no longer needed and beef consumption picked up along with the price becoming more affordable for the common man.

Still, even today, Americans consume a lot more beef than Japanese. Over in Japan, it's just more expensive, usually needs to be imported, and not as traditional as fish or even pork.

Doesn't mean that they can't cook a mean piece of cow though!

Now that you are all either asleep or bored with history lessons, let's talk a little more about gyudon. Gyudon is traditionally beef and onions cooked in a salty-sweet dashi and soy stock and poured over a bowl of rice. Additions like eggs and shirataki noodles are common, as well as a garnish of pickled ginger called beni shoga. This is Japanese fast food at its best!

Gyudon is one of the best selling donburi in Japan, and in my chikuwa teriyaki donburi recipe where I talk about the donburi in general terms, I mentioned that gyudon is what put donburi establishment Yoshinoya on the map. 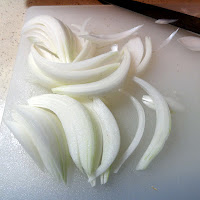 Now if you like your onions softer, you can switch the order of the beef and the onion while cooking, and that way they will have  more time to soak up the broth and soften, but the beef will not have as much time to soak up the broth either, but that could be a plus in possibly a more beefier flavor. I've done it both ways, and I can't decide which I like better. This reheats great, and I like to take it to work as a quick and easy hot bento. 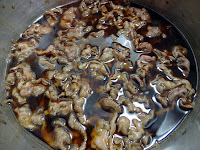 Divide rice into two bowls. Mix the mirin, dashi, shoyu, and sugar in a medium saucepan and heat over medium until boiling. Add in the beef and as soon as it is no longer pink, stir in the onion slices. Boil gently for about 5 minutes, and ladle the beef and onions over the rice. Spoon the cooking broth over the bowls, as little or as much as you like, but try not to make it too soupy or you will end up having to slurp your rice!* Serves two. 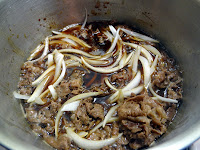 *Apparently you can actually request this in donburi shops in Japan, called tsuyudakudaku which means "dripping with soupiness." I like a lot of broth in mine, but probably not that much! (Thinking about this, I had an insane urge to serve my gyudon like this, with some nice crusty bread on the side to sop up the extra sauce, I think it might be either insane or insanely amazing) 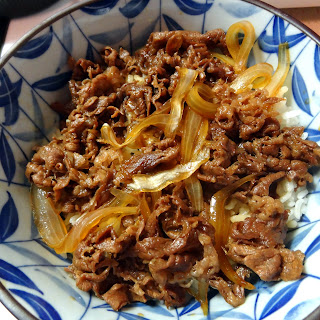