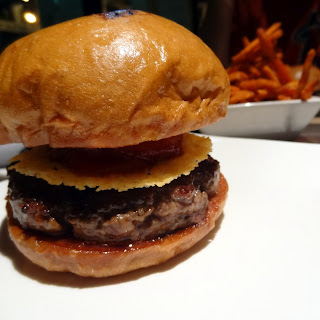 Another Dog Days of Summer post! For my birthday, my brother took me to Umami Burger. I had heard so many good things about this chain, you might say I walked in with a simultaneously excited and jaded outlook.

You know things are never as good as the hype. Everyone told me that the original Paranormal Activity was the scariest movie ever; grown men were telling me they slept with the lights on after viewing, and I walked into that movie theater already quaking in my boots. At the curtain close, I had one word: underwhelmed. I've had Tupperware left too long in the fridge scarier than that movie. It was a classic case of where I would have thought it better if it had not been so lauded, but hype ruined my expectations.

So when we went to Umami Burger in Anaheim, we were excited and hungry, but also a little bit curmudgeonly. We joked about hipster havens, and how essential exposed rafters, Japanese words, and naked light bulbs were to burgers.

We sat out on the patio, which was split and shared with the craft brewery that occupied the same building as Umami Burger. I was pleased to see a very well mannered blue pit sitting outside and vowed to bring Tiara next time, and was less pleased at the volume of noisy earsplittingly loud crying babies. We sat outside chiefly to avoid this one baby, who best be an opera singer in adulthood, cause she had lungs. Unfortunately, there were just as many outside, but at least less annoying. I had no idea it was suddenly hip to have babies.

Service was lightning fast considering how busy it was, and they have an impressive drink selection. We had our burgers and sides in no time at all. We tried three sides they offered: the tempura onion rings, skinny fries, and sweet potato fries ($3-4).  I was pleased that the portions were big enough to split. The tempura rings were an interesting take on onion rings but pretty meh in my book with little seasoning, the thin fries were merely okay, not salty enough, and mostly used as a vehicle for their sauces. The sweet potato fries were the unanimous favorite. This is big considering I hate sweet potato fries. Their sweet potatoes were just dusted with enough cinnamon sugar to make them finger licking good, not cloying sweet like a bad Thanksgiving side dish. Piping hot, crisp on the outside but just thick cut enough that you got a little bit of soft mealy interior, I would get these again. All in all, however, I left thinking that the sides couldn't stand up to the burgers. We should have tried the smushed potatoes, which I have now heard are the best sides on the menu. *Update: I tried the smushed potatoes, and they are indeed amazing. And the sweet potato fries were still just as good. I just want their regular fries to be better!

Umami burger makes all their sauces in house and will bring out several for you to try. We tried the umami ketchup, roasted garlic aïoli, and the jalapeno ranch. The umami ketchup is the most famous, and for good reason, it was the best of the bunch and this comes from a girl that despises ketchup. It was ketchup with the dial turned to 11. The aïoli, despite having an umlaut that usually makes everything from metal bands to Häagen-Dazs a little cooler, was pretty boring with very little garlic taste. The Jalapeno ranch sat somewhere in the middle, being a tasty ranch with just a hint of heat, it didn't make any enemies.

The burgers were better than the hype. I am not a burger person. I'm not even a red meat person, more interested in the baked potato than the filet Mignon at steakhouses. Mr. Mochi always jokes I'm a cheap date, because I don't drink and love side dishes.

The Umami Burger, the most scruntinized dish considering it is the namesake burger, did not disappoint. It features shiitake mushrooms, caramelized onions, roasted tomato, their aforementioned house ketchup, and a fun play on the more traditional melted cheese: a Parmesan crisp. These toppings went great together with a nice textural contrast, and our only beef was the roasted tomato was so small in diameter but thick cut it ended up being pulled out of the mix in one bite.

The Port Stilton Burger also employed carmelized onions (this time in port) as well as stilton cheese for a nice funky cheese variation. Lastly, the Truffle Burger is just as the name implies: chock full of mushroom. Probably was the most one dimensional of the three burgers we tried, but I enjoyed the sweetness of the truffle glaze in contrast to the savory truffle cheese and burger.

What made all of these burgers stand out is their delicious bun and meat. The bun is sweeter and moister than most buns, and sturdy enough you can power through the burger without having it fall apart on you. While I could do without the "U" branded on top, I was seriously impressed with these buns. The meat itself is pink and juicy and seasoned, but still manages to get brown and crisp on the outside. Watch out, it will drip on you as you bite into it, but it was a delicious burger that in my opinion sets the standard for how big steakhouse-style burgers should be cooked.

Umami Burger is a place that we are already craving to go back to, but it makes me want to sneak in some McDonald's fries to go with these amazing burgers and game changing ketchup.

Mr. Mochi and my brother were laughing at me, because there was a lot of construction around the place, and we had to park in an unpaved alley and I was so grumpy at this. I hate getting my feet dusty! Hopefully this changes, I admit it may just be neurotic people like me that would be bothered by it, but if you were in nice heels it would be tough to walk on the uneven dirt.