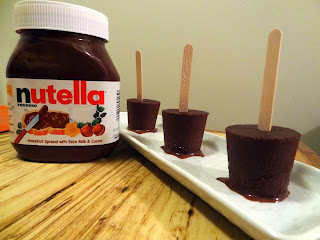 I have a confession: I have never had Nutella before this popsicle. I blame my mom, she would have never let us kids have a chocolate spread as "part of a nutritious breakfast." After all, Nutella is made by Ferrero, which makes Ferrero Rocher chocolates. So I am sure, to my mother, Nutella was tantamount to slathering melted hershey kisses over toast.

Actually, now that I've tasted Nutella, it is just like that, only better.

We know that Nutella is basically a tub of spreadable candy bars, so rather than the breakfast table, let's make dessert with it!

I've seen Nutella fudge pops lurking around the web, and I wanted to make one myself. Most of the recipes called for chocolate milk and use a higher ratio of milk to Nutella, but I wanted tons of Nutella in mine, and I wasn't about to hunt down chocolate hazelnut milk. I think the more concentrated amount of Nutella made the popsicles nice and creamy. Mr. Mochi and my brother raved about the texture, which was very smooth unlike most popsicles which are icier.

I don't think this really counts as a recipe, but all the haters can shush.

I heated the milk until warm (about 15 seconds or so) in the microwave so that the Nutella and milk would mix easier. Whisk together until the Nutella has completely dissolved into the milk, and then pour into your popsicle molds. Place in freezer for about 1 hour, then insert popsicle sticks. Freeze overnight or until firm. One cup was perfect for filling three 3 ounce dixie cups, but this recipe can be easily doubled or tripled.