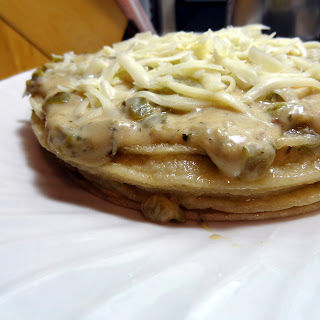 Hatch chiles are here! These New Mexican peppers, usually green, are actually the same as the Anaheim pepper found here in Southern California, but they are usually much hotter.  Hatch chiles are not actually a type of pepper, but simply named for being grown in the Hatch Valley, New Mexico. The hot days and cool nights make for a famously delicious group of chiles, but anyone in New Mexico will tell you that New Mexican peppers in general are special. Most commonly, these peppers are a couple different varieties of New Mexican green chile with names like "Big Jim," which is how farmers can sell Hatch chiles by grouping them "hot, medium, and mild." The hot ones are hotter than jalapenos! Here's a list of cultivars developed by New Mexico State University.

My dad's side of the family is from New Mexico, and I remember getting big batches of roasted chiles and pecans from the family. So when I saw that the chiles were arriving from New Mexico, I just had to jump on this! I wanted to make something classic New Mexican, so what better than some enchiladas with green chile sauce? Like in my dad's recipe for enchiladas, these puppies are stacked like pancakes, not rolled.

You can vary the heat of the enchilada by the type of New Mexican chili pepper used. I made them with the mild/medium variety and Mr. Mochi and I unanimously agreed that next time we would use the hotter ones. The cheese and the milk do a good job taming the green chile, so don't be afraid of heat. And while red peppers do pop up in bushels of peppers, I suggest using the green ones so that way the color goes with the tomatillos.

Speaking of which, this green chile sauce uses tomatillos like the Mexican chile verde, a fruit I had never used before. They are members of the nightshade family just like tomatoes, but they are actually a closer relative of the cape gooseberry, which also has a husk that covers the fruit. They are acidic and tart, and are pretty weird to me for whatever reason (husks!). You peel off the husk, wash off the sticky residue on the skin, and chop them up, no need to peel or seed them.

I actually picked up this recipe by the chiles in Sprouts of all places. You know the free recipes on tiny slips they like to put near ingredients in grocery stores? It actually looked pretty similar to stacked enchilada recipes I have, but with some typical problems with a grocery store recipe. For instance, things were missing off the ingredient list only to magically appear in the instructions without amounts.

So I decided to make this recipe for my blog and iron out the guesswork!

Cook onions and garlic in the tablespoon of oil in a saucepan over medium heat until soft. Stir in parsley and bell pepper, then the chile and tomatillos. Simmer over medium heat for 10 minutes. Taste and season with salt and sugar to taste, I suggest a generous pinch of each. Dissolve cornstarch in milk, and simmer with the chile mixture for another 10 minutes. Remove from heat, and stir in 1 cup of the cheese. Heat the oil in another pan and heat until a piece of tortilla sizzles. Fry the first tortilla in the oil for about 40-60 seconds each, then drain and place on a serving plate and spoon some sauce and sprinkle some pine nuts on top. Continue doing this with each tortilla, stacking upon the previous layer until all the tortillas are used. Pour the rest of the chile sauce over the stack and sprinkle the remaining cheese on top. Serve cut into wedges.