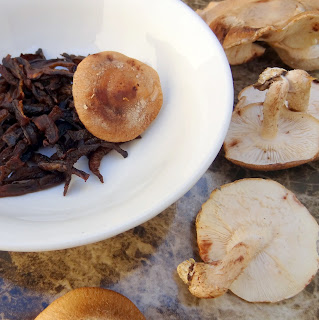 Funny story: As I was writing this blog post, I was munching on some delicious fresh shiitake mushrooms my mom and I just scored at the farmer's market. They smelled so good, I couldn't resist. I decided to google "shiitake" just to make sure I wasn't doing anything dumb like spelling it wrong. The wikipedia page confirmed I'm not as dumb as I think I am, and had some cool trivia on shiitakes that I enjoyed scrolling through as I happily snacked on these fragrant and earthy mushrooms.

Shiitake Dermatitis: "Consumption of raw or slightly cooked shiitake mushrooms can cause 'an erythematous, micro-papular, streaky, extremely pruriginous rash' that occurs all over the body including face and scalp, which appears about 48 hours after consumption and disappears after 10 days."

Seriously?  Spit-takes are not just for comedic effect. 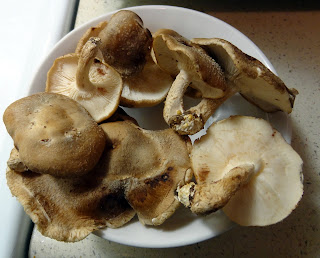 Now I am beyond itchy, even though literal seconds after ingestion. Obviously it's just psychological, but I can't help but imagine I am going to be dying a horrible fiery and itchy death as I claw through my own skin.

I've got 48 hours to wonder if I am one of the unlucky ones, about 2 in 500. Apparently cooked shiitake have no itchy perils, so with this recipe you are all safe!

This roasted shiitake recipe is tasty, but I don't think it tastes like bacon, it tastes like crunchy delicious addictive amazingness. Which sounds a lot like bacon actually. I'll let you be the judge. 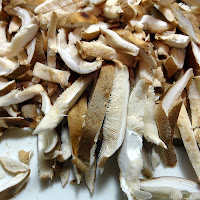 I got these mushrooms from some very nice vendors at the local farmers market, Kane's Family Farm. They grow shiitake and oyster mushrooms as well as Haas avocados. My mother says they will eventually start selling mushrooms logs so you can try your hand at growing mushrooms at home. Sounds exciting!

Besides snacking on these by the handful, I will fold some into hot rice for some tasty rice balls (eat immediately before they lose their crunch) or sprinkle on a salad. 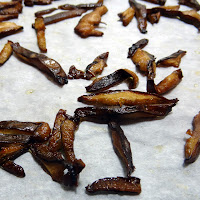 Preheat oven to 350 degrees Fahrenheit. Remove the stems from the shiitake, and cut into 1/4" strips. Toss in the olive oil and shoyu. Place in a single layer on a baking sheet lined with parchment paper and cook until crisp, about 10-30 minutes, stirring and checking every ten minutes until desired doneness. At ten minutes, they still retain a lot of moisture, and at 30 they are more crispy. Sprinkle with sea salt and let cool. 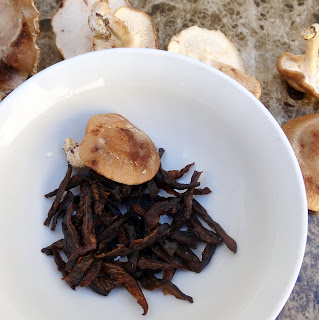