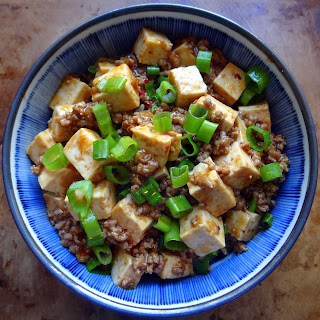 Mapo Tofu is actually a Chinese dish brought to Japan. This easy-to-make dish consists of ground meat and chunks of tofu enrobed in a spicy oily sauce flavored with fermented chili and soybeans.

Sometimes you will see mapo tofu by different names: mabo tofu or mabo doufu, but it's all the same thing.

Despite its Chinese origins, it is super popular in Japan. The original Chinese-style mapo tofu is blazing hot and complemented by the mouth-numbing effect of the sichuan peppercorns.

The Japanese-style is a bit more laid-back, a bit more umami than face-melting. I love how the nuttiness of the sesame oil takes on a funky fermented kick from the use of miso and fermented chili bean paste.

This dish has become such a part of Japanese cusine you can even buy the sauce in pouches almost like Hamburger Helper with a helpful slogan "Just add tofu and ground meet!" emblazoned upon it. Even if you buy the "hot" version it is still laughably mild.

If you're craving the spicy Sichuan Mapo Tofu, I recommend checking out these recipes (here and here) by mapo tofu aficionados.
Read more »
Posted by Miss Mochi at 7:36 PM 2 comments: 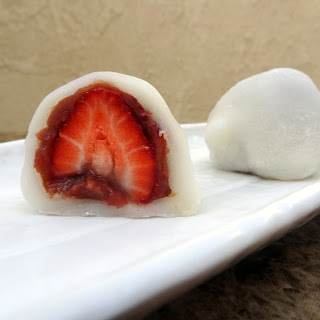 ha•pa (hä’pä) adj. 1. Slang. Of mixed racial heritage with partial roots in Asian and/or Pacific Islander ancestry. n. 2. Slang. A person of such ancestry.
Hapa, literally “half” in Hawaiian, was originally used as a derogatory term to describe people of biracial ancestry. Today, many multiracial individuals of Asian or Pacific Islander descent have embraced the word as a term of prideful self-identification. Although some object to the term’s appropriation and perceived misuse outside of its traditional Hawaiian context, “Hapa” has been widely adopted by the Asian and Pacific Islander multiracial communities, and even by some multiracial, non-Asians. (Taken from Hapa Voice)

My blog is called Miss Mochi's Adventures because it describes a lot about who I am. I am squishy and white and sweet, with roots in Japan. Not only am I Japanese, but Native American, Irish, British, German, Welsh...

It's hard to have an identity of Japanese American, when I don't really fit in with them. My Japanese relatives who have married into the family love to exclaim over having a big busty blonde* in the family. One might think that fitting in with the white crowd at school would be a cinch, with my white-as-wonderbread looks, but try pulling out some saki ika* of your lunch box in elementary school, and you realize you're a little different.

*it's what happens when a teeny Japanese lady marries a German/Welsh man, whose offspring thenmarries a Caucasian/American Indian apparently FYI. Apparently the boobs are from the German ladies in my family according to my mom.
*dried shredded squid or cuttlefish, it's delish and great for creeping out coworkers

So basically this is part culture blog, part cooking blog, part something else.

Posted by Miss Mochi at 7:06 PM No comments: