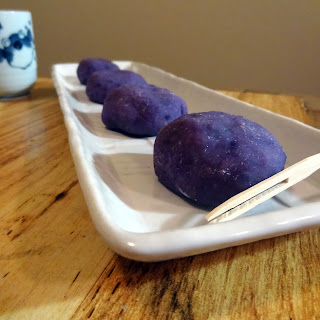 The Okinawan purple sweet potato could not be resisted when I went to the market. After going to Mitsuwa's Okinawan food fair last week where Mr. Mochi and I had amazing beni imo ice cream, I was ready for another purple tuber recipe! I decided to make some mochi for my grandmother, since I had all the ingredients on hand and I haven't made any wagashi in a while.

I talked a little about beni imo in my Okinawan Sweet Potato Haupia Pie post, but today I would like to tackle the difference between beni imo and ube.

Beni imo, as we know, is a white skinned purple fleshed sweet potato, which originated from the Americas but is embraced by the Japanese. Ube is a dark skinned purple fleshed yam which originated from Africa and is popular in the Philippines.  Ube is quite rare if not impossible to find here in America, unless it is frozen or powdered, and is more fibrous and less sweet than beni imo with a shaggier outside similar to other yams and taro.

Confused? Don't worry, as long as it's purple fleshed, it will make great purple mochi! 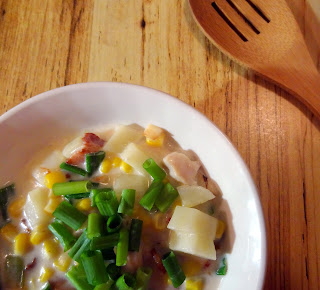 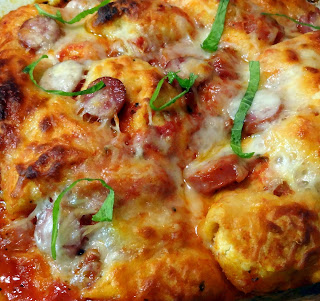 Back in May, I made Bubble Up Pizza, where refrigerated biscuit dough and jarred pasta sauce is used to make a delicious pull apart pizza dinner in a trice. Well, like all good recipes, I couldn't resist tinkering it a bit and sharing it with you.

Now I think most hapa things come about by chance. The spam musubi wasn't cleverly designed, but born of a need: to use this weird foreign meat in the most comfortable way Japanese Americans knew how, in a rice ball.

The same goes for this recipe. I wasn't looking for a clever hapa version of a classic, I just didn't have any pepperoni or basil. What I did have were some Japanese market ingredients, so a new twist on bubble pizza was born. Instead of pepperoni and basil, I used Japanese kurobuta sausages and fresh shiso from my patio. More info on kurobuta after the jump: 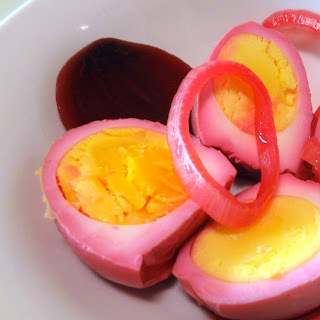 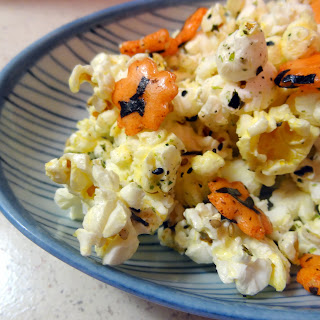 Hurricane popcorn is like SPAM musubi and butter mochi: classic delicious hapa food. They also share the common connection of all being invented in Hawaii, arguably the biggest hapa community around. After all, they did invent and popularize the very term "hapa."

This amazingly addicting snack combines Japanese flavors with American popcorn. Furikake and kakimochi (rice crackers) are sprinkled over buttery popcorn for something that is simultaneously sweet and salty, rich and airy, with an umami punch.

Furikake, a Japanese condiment made of dried nori seaweed mixed with salt, sesame seeds, and sometimes even eggs or dried fish flakes, is usually sprinkled over rice but instead is used to great effect over popcorn. I last used it in another hapa snack food: furikake chex mix.

Kakimochi, also known as arare (あられ) are more well known here in America. Any gas station probably has a very bland and maybe stale "oriental snack mix" which is primarily rice crackers. Believe me when I tell you that most kakimochi is worlds above this travesty; soy sauce and nori make for an assertively flavored sweet crunchy cracker that seems to be both melt-in-your-mouth and snappy. You could say that the furikake chex mix was really a kakimochi mix made with western crackers, with the same flavor principles of sweet and salty. 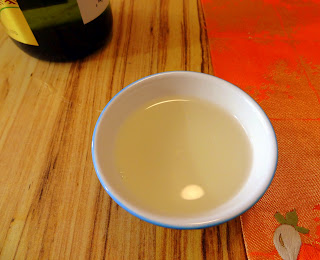 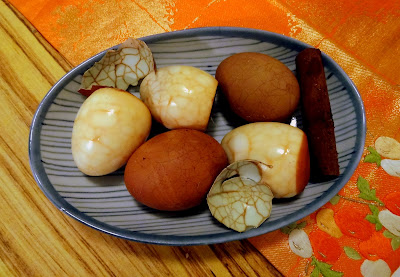 Tea eggs are perhaps the prettiest eggs you are ever going to see besides those painted for Easter, and tea eggs taste better.

Usually found as a street food in China, tea eggs are cracked hard boiled eggs that are heated in a mixture of spices, tea, and soy sauce for a period of time until the egg white gets infused with flavor. The pretty marbled pattern is the by-product of the shell being left on and the flavoring seeping through the cracks. You can completely peel the eggs and therefore bypass some of the steeping time, but I love the look of the marbled eggs. 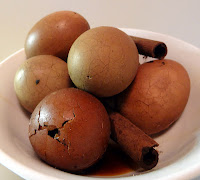 The best thing about this recipe is you can let them steep as long as you like. The Chinese American bakery near my school has a crockpot of these simmering nonstop, and nothing is tastier than walking to class munching on one. The longer you simmer, the more deeply the flavor will penetrate. I know cooks that will let the eggs steep overnight in the cooking liquid, and who knows how long they simmer in that crockpot at the bakery to achieve such deliciousness!

I like these tucked into a bento, or chopped and mixed with a bit of mayo for an interesting egg salad. Try them warm and cold, I like both. 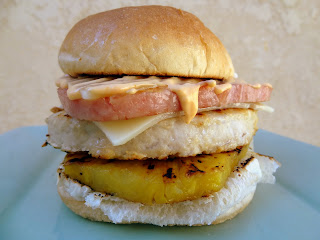 I've mentioned Serious Eats as being one of my favorite food websites, and yesterday their Burger Lab posted a mouthwatering recipe I had to try, like now. A burger topped with sriracha mayo, spam, and grilled pineapple: sounds like the perfect burger for a spam and sriracha aficionado like me.

Only problem is that everything was grilled in the original recipe. I don't have a grill pan, let alone a grill! So I decided to adapt the recipe for cooking on stove top, as well as cutting it down for just Mr. Mochi and I. While Tiara would object, I am usually cooking for two.

I usually make turkey burgers and had some patties on hand, and honestly there is so much going on in this recipe I don't think you'll miss the beef. Don't let the turkey fool you into thinking this is a healthy burger, however, because with two slices of spam, two slices of cheese, and a hefty dose of mayo, it is still a monster. 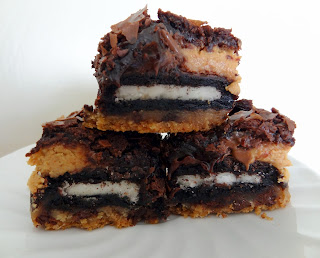 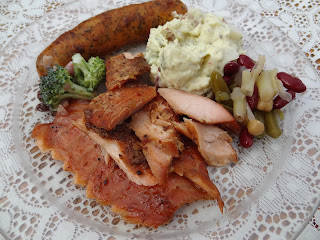 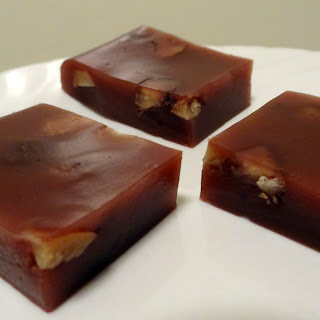 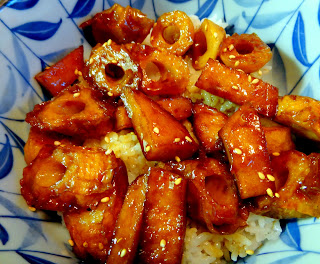 I cannot deny my donburi love. Donburi isn't a dish, it's a concept. Anything poured or placed over rice in a deep bowl becomes a donburi. Of course, there are classics like una-tama don, egg eel bowl, and katsu karē don, curry cutlet bowl, but I will cook up just about anything, plop it on top of a rice bowl, and serve it.

Donburi have even invaded the United States, and most people have enjoyed donburi without even realizing it. Flame Broiler's beef and chicken bowls are prime examples of delicious fast food donburis.

Yoshinoya, another donburi restaurant here, has been around since 1899! They are most famous for their beef bowl, called gyūdon. Their motto "tasty, low-priced, and quick" embodies what I love most about donburi.

This donburi may not be the most famous, but it is pretty tasty and a good basis to work your own donburi magic. The liquids reduce down to a classic teriyaki, so the chikuwa can be replaced with beef or chicken for a different teriyaki bowl.