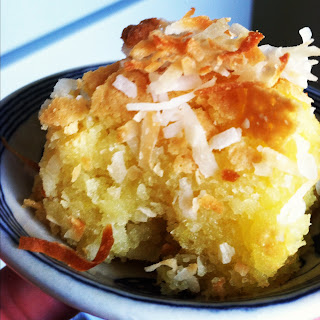 Now, haters will love to point out that "butter mochi isn't real mochi!" Not only is that statement pretty dumb, because butter mochi was never trying to fool someone into thinking it was wagashi, but it also pretty common. I really hate when people are such snobs. Like hating on the California roll, stating that "true Japanese food lovers would never sink that low" to eat something created in America. People like things in black and white, and mixing it up like with the California Roll and Butter Mochi is a threat. I would draw a parallel to how people tend to categorize multiracial people. Tiger Woods and Barack Obama are "black" even though they are multiracial. Tiger Woods is the "first black golfer to win a majors" when in reality he's mostly Asian AKA Hapa.

On the record, I LOVE California rolls, especially when the avocado is just right, and when rolled in flying fish roe. And more and more are jumping on this bandwagon, from umami burgers to korean tacos. *Miss Mochi isn't real Japanese, she's hapa, and she never pretended to be anything else. She's like butter mochi and California rolls!

Mix all the ingredients together and pour into 9x13 inch pan sprayed with PAM. Bake for 1hr at 375 degrees F or until toothpick comes out clean. Cut into squares after letting it cool slightly.

I like my butter mochi warm. There are variations of the recipe that include milk, but I like the fact that my version is wheat, gluten, and dairy free by using margarine.

*If you like butter mochi a little more subtly sweet, you can reduce the sugar accordingly depending on your personal taste. I often reduce the sugar down to 1.5 cups, which makes it much less sweet. This iteration of butter mochi is definitely geared to an American palate that expects cake to be rather sweet, so play around with the amount of sugar!
Posted by Miss Mochi at 6:49 PM