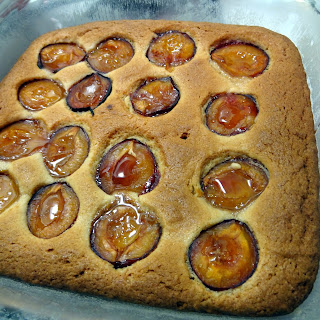 My mother is a big fan of the local farmer's market. Almost every Saturday she is there bright and early, usually picking up fruit and veggies with her pooch. Not only are there seasonal vegetables, but also other goods like amazing tamales and fresh bread. She even picks up her fresh honey from a vendor there.

This past Saturday, she brought home some goodies for me to experiment with! Some fresh oyster mushrooms which might appear on this blog on a later date, some peaches which were promptly devoured as is (don't leave a good peach alone with Miss Mochi), and some french plums. 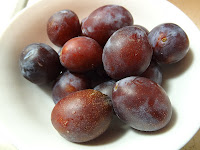 French plums are also known as sugar plums or french prunes, and are the small variety of plums that are usually cooked with or dried as prunes. They are about the size of a large walnut, and are much sweeter and less tart than a regular plum.

I bit into one excitedly, still on my fresh peach rampage and thirsting for plum, and was brought up short by the lack of acidity. Tasted like a weird plum to me! My mother later texted me and asked what I was planning on cooking with the fruit.

Ahh! Cooking! Didn't even think to cook peaches or plums, seeing as I usually just eat them at once, but apparently that's what you do with these plums if they aren't your thing raw. Once cooked, I had a better appreciation for the french plum, as the cooking concentrated its sweetness and brought out the little bit of tartness they have.

While searching for information about french plums, I discovered a couple types of recipes that looked promising. First I was set on making a french clatoufis, thinking that french clatoufis + french plums is obviously a winner. But once I stumbled across Dorie's brown sugar cake with plums in it, I knew I wanted to try this cake

Readers of this blog will be happy to note that my oven has decided to not die after all.

Preheat oven to 350 degrees Fahrenheit. Butter and flour an 8"x8" baking pan. Whisk the dry ingredients together. Place on a baking sheet, and don't forget the baking sheet when you go to put it in the oven, or you might over-bake the damn cake edges like I did. Beat the butter over medium speed until fluffy, then beat in the sugar, about 4 minutes total. Beat in eggs one at a time, about a minute each. Pour in the oil and vanilla and zest (if using) and beat until combined. The batter will be slick and shiny and tasty but don't eat it all. Fold in the dry ingredients until just incorporated.

Pour into your prepared baking pan (don't forget the baking sheet!) and place on the center rack. Cook for about 40 minutes, until the center tests clean. Wait 15 minutes before inverting the cake and letting cool on a rack, to prevent the plum juices from being lost. 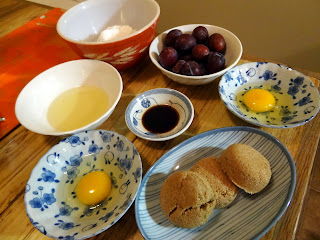 This actually will keep at room temperature, wrapped, for 2 days.
Again, don't let the edges overcook like me. I didn't have the cardamon or zest, and it was still very flavorful. The original recipe called for 8 plums, so I put in my 8 french plums, but I would really put in 5x5 halves for more plums!
Posted by Miss Mochi at 5:12 PM