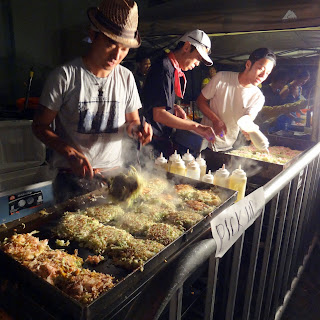 I had an absolute blast this weekend at the 626 Night Market held at the Santa Anita Park in Arcadia California! Billed as the largest Asian night market in the United States, I couldn't resist checking it out. They boast over 150 vendors, food stalls, food trucks, music acts, and even non-profit organizations, so I figured it would be a fun night out with tons of fun food to share with you all!

Admission is only $3 ($2 if you get there before 6pm) so it's relatively cheap, and the individual food prices were pretty reasonable. I recommend bringing cash, some vendors accepted cards and some were cash-only. And of course, make sure to bring a big appetite! Just walking to the event, you could smell delicious things wafting to the parking lot. 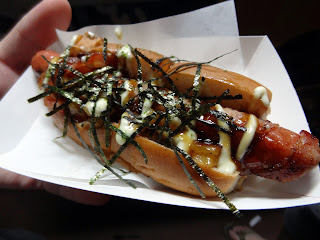 Tokyo Doggie Style is a food truck that serves up Japanese American comfort food: hot dogs, french fries, musubi, and more with a Japanese twist. We tried their Bacon-Wrapped Hawaiian Terrier Dog, which had beautifully crispy bacon, grilled onions, shredded nori, mayo, and teriyaki sauce all on toasted sweet bread. This dog was expertly designed, I've had some Hawaiian dogs that over-do it on the mayo or teriyaki, or the bread is soggy, the bacon undercooked, and the onions still raw. This was delicious and surprisingly not as heavy as it sounds; we were tempted to get seconds! I couldn't resist snapping up a grilled soy sauce corn-on-the-cob ($1.25) to go with it, but we decided to split one dog between us so we didn't get full at the first place we saw. I regret not trying their Hurry Curry Dog, but it just means I will have to hunt down this truck again!

We got mesmerized watching the kids rapidly make takoyaki on the grill at the Tanota takoyaki booth, flipping and rotating the balls of batter to ensure a perfectly golden sphere of batter that encases octopus, tempura bits, and more. Mr. Mochi loves takoyaki and was sorely tempted, but we decided we wanted to try new things tonight. Looking at their menu online, however, I am definitely going to check them out next time, to try their shrimp takoyaki and jalapeno takoyaki! 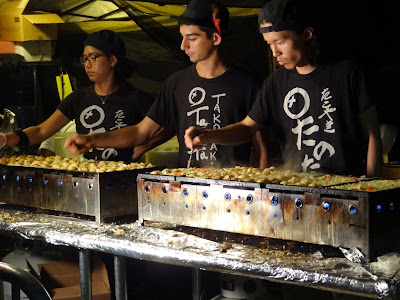 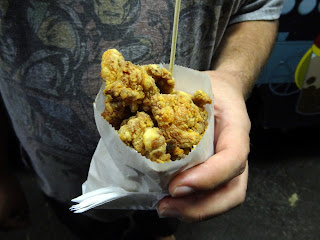 After wandering by the music acts, checking out some Mini Coopers, and general people-watching, we stopped by the Mighty Boba food truck, which wins the Miss Mochi award for cutest truck art. They had brick toast, boba, and even popcorn chicken dressed up as super heroes! Now sometimes something is more style than substance, but I have to say even with a plain black truck I'd still be in love. Their Buttermilk Popcorn Chicken ($5) took me back to high school, where we would grab a milk tea and a piping-hot bag of popcorn chicken served with a skewer for eating. These were even better than those I had in high school, super moist and soft inside with a tangy buttermilk crunchy outside. We also sampled their Condensed Milk Toast ($4) which was a generous inch thick, with a nicely caramelized top and a soft buttery inside. Mr. Mochi fell in love with their Strawberry Milk Tea with boba ($4.50) which was sweet and packed with tons of strawberry flavor that was neither cloying nor artificial tasting. 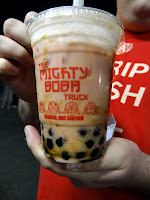 Gottsui's okonomiyaki (below) was a first for Mr. Mochi, who I can report enjoyed it immensely. Japanese for "grill what you like," okonomiyaki is meat, cabbage, onions and eggs all binded together with batter, sort of like a Japanese omelet or crazy savory pancake. It is then topped with Japanese mayo, okonomiyaki sauce (similar to Worcestershire sauce but thicker and sweeter), green onions, katsuobushi (dried bonito flakes), and more. We sampled their Pork Okonomiyaki ($5) which boasted several slices of thin pork belly that were expertly crisped. They seemed to use less batter, so the okonomiyaki was more loosely formed with lots and lots of crisp cabbage. It was piping hot, super tasty, and now has Mr. Mochi ready to try the Hiroshima version, which includes yakisoba noodles and a fried egg piled on top. 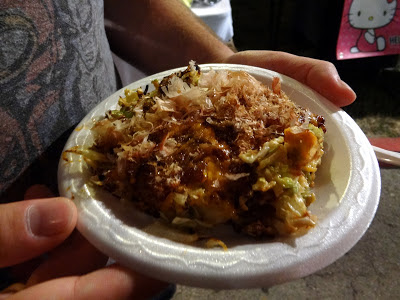 Last but not least, I don't even have a name for the vendor who sold Bing Tang Hu Lu (冰糖葫芦), or candy-covered fruit skewers (below). He didn't have a sign and was tucked away in a corner next to a busy squid grilling booth. In fact, I only realized he was there because I accosted two people carrying the skewers around and asked them where they scored these tasty treats. When I walked up to the booth, the Bro-chi and Mr. Mochi burst out laughing, because he had the skewers on a styrofoam block in an unlit corner, looking very traditional night market, especially compared to the slick food trucks with LED TVs playing music videos. I didn't care, and gladly forked over a couple dollars for a skewer of candy-covered strawberries. Since it is prime strawberry season, this skewer was masterful. A hard sugar coating yielded up soft and slightly warm super ripe strawberries. Stay tuned for a recipe on these babies! 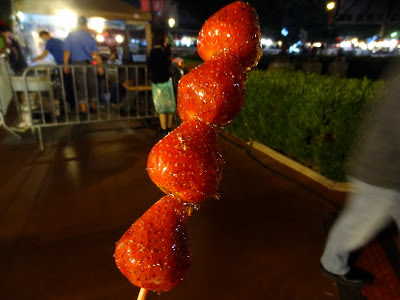 All-in-all, we closed the 626 Night Market down, wandering around for hours, munching our way through a pleasant evening. I'd recommend getting there early, because it was pretty crowded at some booths, and a volunteer for the Night Market told me that it was much busier after 8p.m. than it was before 7p.m. Thankfully, there are two more weekends planned this summer, see below!