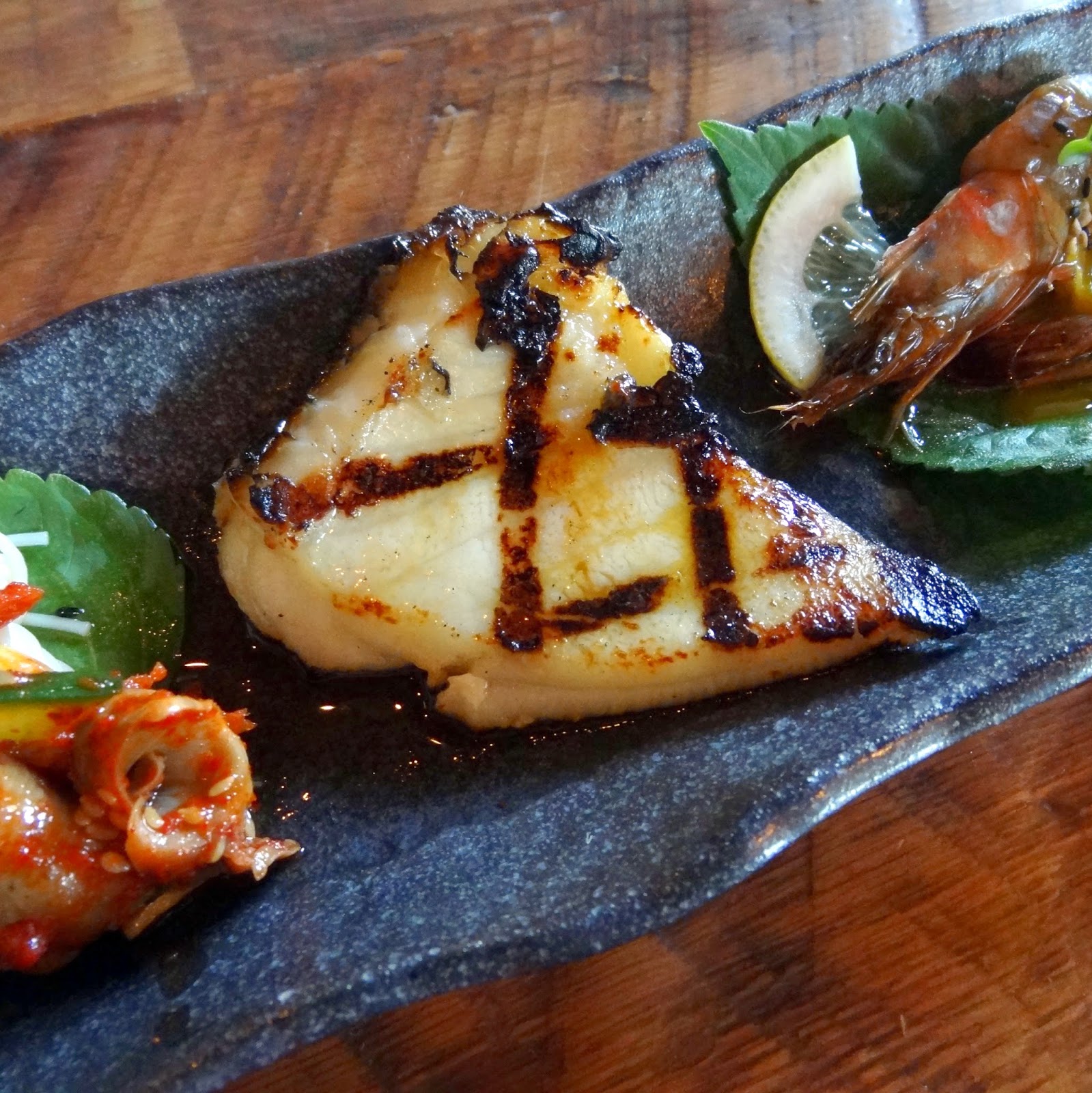 Mr. Mochi and I recently went to a media tasting event for a new izakaya in Orange County, Dami Sushi and Izakaya. Since we love our local izakaya, where you can always grab a cold pint and perhaps a yakitori skewer or two, we were very excited to try another one close by.

Dami Sushi and Izakaya in Buena Park, California, just had their grand opening and invited us to try some of their signature dishes. They also generously donated a $100 gift certificate that you can enter to win below!

I'm not a big decor person, but the first thing you'll think when you walk in is how cool this place looks. I love the mix of modern technology (the wall above the sushi bar changes color!) with rustic wood and fresh plants. The restaurant also manages to have great airflow, it's breezy in there without us needing a jacket. It also strikes an important balance between atmospheric izakaya lighting and the need for me to see my food. All of these pictures below were taken without any additional lighting, but Mr. Mochi commented that the atmosphere in Dami meant this place was going to be a surefire date place for us.

Especially once we tried the food.

We started off with a sampler, tiny bites of three full sized dishes. On the left, the Siraegi Rice Bowl ($7): dried radish greens that are slow cooked with shoyu and dashi as well as dried baby anchovies. When the magaso (fish roe) and the white rice are mixed, it turns a cheery orange color. We both agreed this was tasty enough we would want the full sized version. In the middle, we sampled their Whole Grain Salad ($9), a tasty mix of black rice, indian millet, lentils, kidney beans, and fresh mozzarella served with baby mesclun and a soy vinaigrette. which surprised me how much I liked it because I'm not always the biggest fan of grain-based salads. It's either too cold and the grains are mushy, or it's too hot and the greens taste stewed. This was none of these things, and the vinaigrette made it fresh-tasting. Lastly on the right, we sampled a mini portion of the Jawanmushi ($4) which I know as a "chawanmushi:" a savory egg custard steamed with shrimp, ginko nuts, and shiitake mushrooms. Their version was very smooth and I applaud their seasoning because even the small size was very flavorful but not too salty.

Next we tried two oyster dishes prepared in wildly different ways: the Oyster Tempura ($16), served with ponzu sauce on a bed of enoki mushroom and grated daikon, and the Oyster Shooter, which was a shot glass on ice with a raw oyster, ponzu sauce, masago fish roe, a raw quail egg, and green onions. I loved the oyster tempura, but did not care for the shooter as I found it too overpowering and vinegary and was literally coughing after swallowing it. I don't like regular shots of alcohol either, so I would chalk this up to difference in taste because other guests said it was their favorite thing.

We also sampled three of their yakitori: Asparagus Maki ($3), Enoki Maki ($3), and the Wasabi Chicken Breast ($2.50). I was very pleased with the maki, where the vegetables were rolled up in thin slices of bacon/pork belly and grilled until crispy on the outside and juicy on the inside. The wasabi chicken breast skewer was equally as tasty, and I appreciated the careful amount of seasonings since chicken breast can get bland if you're not careful.

Their Dami Seafood Box ($40) is designed for two to split, and it is beautiful. I think their presentation makes all the difference with this sashimi and sushi offering. My pictures certainly don't do it justice, you can see a better photo on their official website, but believe me when I say that it's even prettier in person. It had a good mix of classic seafood as well as some harder-to-find fare like abalone. You'll recognize the salmon, tuna, and yellowtail, but the snapper was a beautiful fish with its white flesh and patterned edge that you don't often see here in Orange County and I definitely urge you to try it. We also tried two rolls, the Love Roll ($15)and the Dami Special Roll ($13), which I appreciated having the chance to taste because since the Love Roll has no seaweed, and the Dami Special Roll has no rice, they wouldn't have been something I would have ordered normally. I have to say that I was hooked and loved both of them!

Now, most of the time I'm wary when a restaurant tries to do too many types of cuisine. You know ones that seem to specialize in nothing, but cook everything? A lot of the dishes at Dami have a lot of Korean influence or origin despite them being billed as an Izakaya. Well my worries were put aside when I tried all the dishes at Dami. My favorite dish of the day was actually one of Korean origin, the Ssam-Bab Set ($11). With spicy pork belly served sizzling like a fajita, you grab some ssam-jang, spread it on a lettuce wrap, and pile it high with shiso, cucumbers, carrots, rice, and some of that pork belly once it's cooled down enough to eat. When I took my mother and grandmother to Dami for Mother's Day, I got this dish again. When I tried the full sized version, I realized just how big a portion it was. I ended up taking about half of it home.

Mr. Mochi's favorite was the Miso Chilean Sea Bass ($12) that is so pretty the picture is the featured one at the top of this blog post. One bite and he leaned across the table asking me to attempt to make it at home. Marinated in sake and miso, this dish is buttery and savory, with most of the fish melting in your mouth but contrasted with crunchy caramelized bits from the grilling. Along with the sea bass, we tried the Golbang Yi Muchim (Sea Snail Salad, $18) which had a great chewy texture and flavor, but the Saewoojang (Preserved Shrimp, $8 for the rice bowl) appealed to neither of us.

The Match Green Tea Crème Brûlée was just perfect. Not too sweet, not too bitter, and the fresh berries were a great contrast. I'd go back just to eat this. 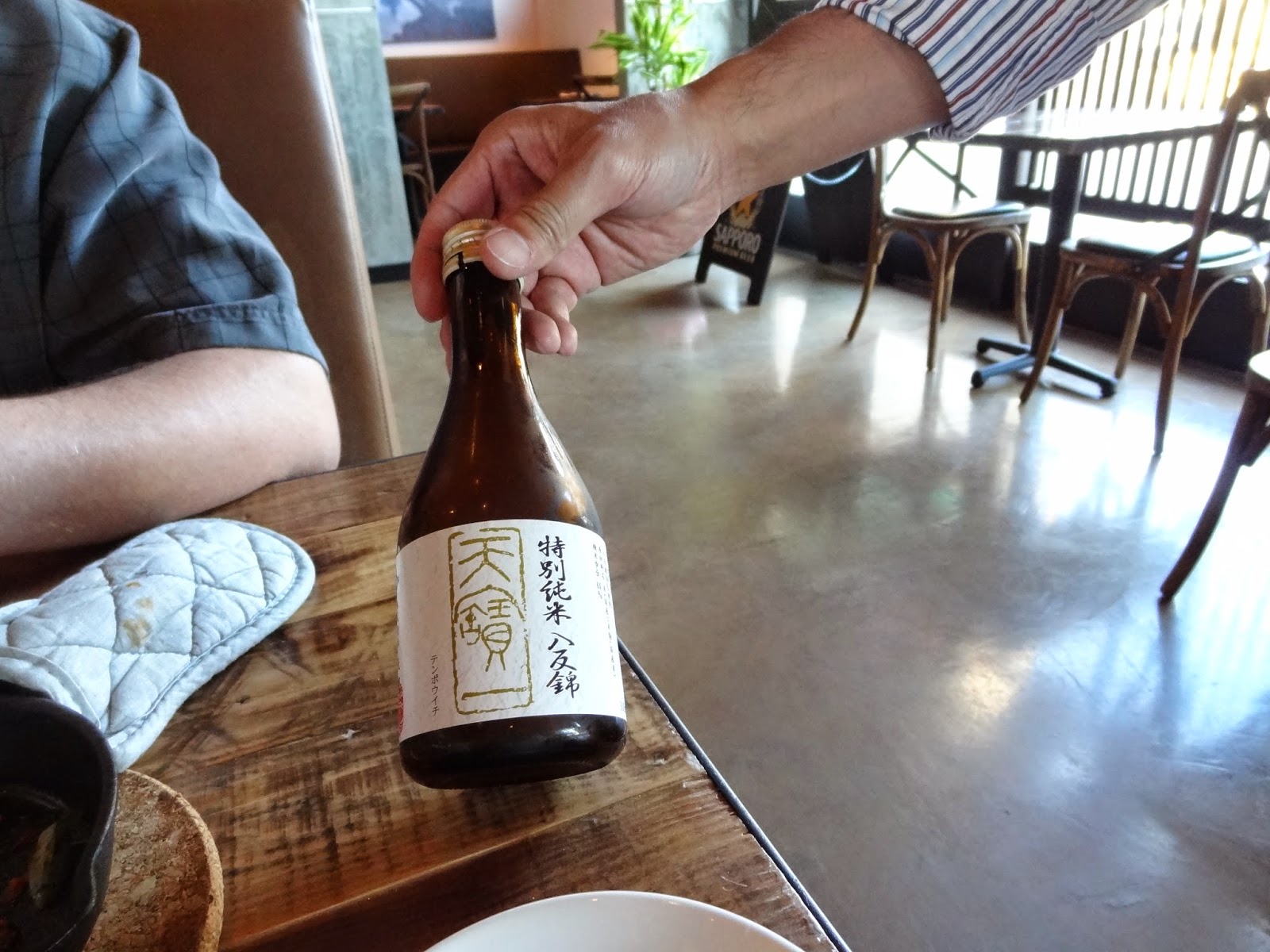 Dami was also kind enough to let us try three of their sakes. I am not a drinker, so I found it fascinating to taste three different types of sake. The Sihin-Rai Junmai Daiginjo ($95) had a wonderful scent and super crisp finish, the Jokigen Junmai Gingo ($60) was a stronger and bolder sake, and the Tenpuichi Tokubetsu Junmai ($19) was the sweetest. I'm no expert on sake, but I really liked the way sake went with the dishes we tried.

I'm not a fan of writing a review based strictly on a media tasting. I don't think it's a honest representation of the restaurant. So I made sure to come back as a paying customer before posting. Everything was just as delicious, the service was even better than before, and I realized that the regular portions of everything is huge for an izakaya. A new dish we tried that I really enjoyed was the Clam Pot ($12), which had tons of manila clams in a savory briny broth accented with hot peppers. It was a lot of clams, we actually split it between three of us!

Now, the kind people at Dami Sushi and Izakaya have provided me with a $100 gift certificate to give away on my blog! Simply "like" Miss Mochi's Adventures on Facebook and leave a comment on the Facebook giveaway announcement here on what dish I mentioned in this review that you are most excited to try at Dami. Don't have a facebook? Just comment below, but you can't comment anonymously or I won't be able to contact you if you win. *This contest is now closed, congrats to Natasha!*

Disclaimer: As mentioned above, Mr. Mochi and I were invited to a complimentary menu tasting. However, I was not required to blog about the event, let alone paid or pressured to write a positive review. I also visited the restaurant again as a paying customer before penning this, and will be returning again soon in the future. This review reflects solely my opinions, and the prices are at the time of publication.