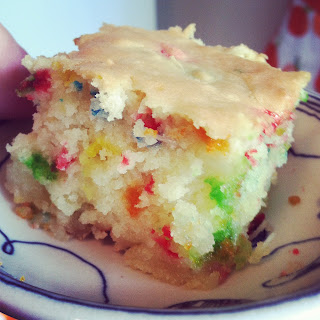 I have been tinkering with my favorite Hapa recipe of Butter Mochi. You can read about this dessert in my earlier post in order to gain some history and info about it. Some common variations include adding shredded coconut, anko, or chocolate. I decided to make a batch of butter mochi for my coworkers to try, since one of my coworkers wanted to try it after seeing my picture of my last batch. For fun, I drew inspiration from confetti cake. If you've never heard of confetti cake, or "funfetti cake," its pretty much a white cake livened up with sprinkles that melt into the cake batter and produce little spots of color. Usually it's just a prepackaged mix, which isn't necessarily bad but it can't hold a candle to homemade cake batter. Very popular here in America for little kid's birthday parties, it's pretty nostalgic for a certain generation.

Anyways, I decided to try and make confetti butter mochi! I also added in some shredded coconut and christened it Confetti Coconut Cake! The sprinkles don't really add much as far as flavor, it's merely aesthetics.

I like my butter mochi warm. There are variations of the recipe that include milk, but I like the fact that my version is wheat, gluten, and even dairy free by using margarine.