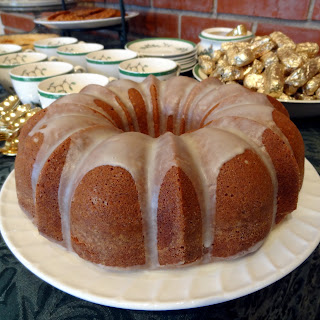 Mr. Mochi is obsessed with eggnog. As soon as it is available in stores, he will chug that stuff down by the pint. No exaggeration, he probably gets a day's worth of calories by the time he's done with the carton. So I decided I wanted to make him some sort of eggnog baked good. There were several recipes for eggnog bundt cake that I spied recently, notably America's Test Kitchen's version, so I decided that I might as well break out the bundt pan again!

Now I wanted an eggnog cake with real eggnog in it, not just eggnog spices like the America's Test Kitchen's version, because I knew Mr. Mochi would be delighted for me to bring home a jug of eggnog that he gets to polish off after I've stolen a cup or two.

This is a twist on an eggnog pound cake recipe I found online, and Mr. Mochi was delighted to have a leftover jug of eggnog and a cake that in his words, "tastes just like eggnog, only better!"

Now, I like eggnog with just a smidge of rum (just enough to thin the consistency a bit) and a sprinkle of cinnamon on top, but this is a good way to eat your eggnog. 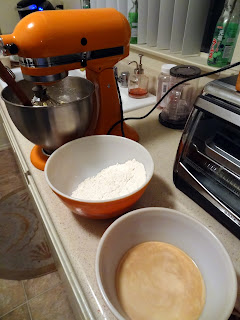 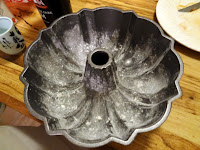 Preheat oven to 325 degrees Fahrenheit. Cream together the butter and sugar together over medium speed until it is light and fluffy. Add in the eggs one at a time until just incorporated. Combine the vanilla extract, rum, and eggnog in a mixing bowl. In a separate bowl, sift together the dry ingredients (flour, baking powder, salt, nutmeg). Alternating dry and wet ingredients, slowly mix in in small batches until it is all mixed in. Do not over mix. Pour into a buttered and floured bundt pan, smooth the top of the batter, and bake for 45-55 minutes in the lower third of the oven, or until a toothpick inserted into the middle of the pan comes out clean.

To make the frosting, whisk together the powdered sugar, orange juice, and rum. Mine ended up thinner than I usually like, because I was in a hurry and didn't measure anything but just mixed together hap-hazardously. Serve with extra frosting thinned and warmed up to pour over slices. 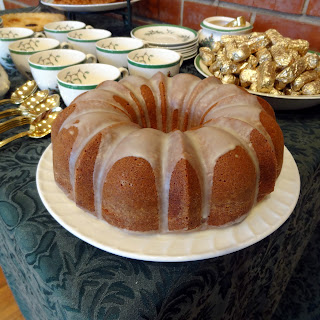 The original recipe called for a glaze made with granulated sugar that was designed to soak into the cake, but I decided that a frosting would be prettier and much less likely to harden into an unattractive shell of sugar.