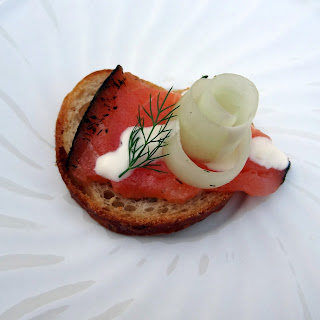 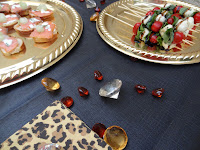 With a vegetable peeler, peel the cucumber's skin off. Next, take the vegetable peeler to make ribbons of the cucumber. Only use the portion without seeds. Mix the lemon zest, creme fraiche, and lemon juice thoroughly. Both of these steps can be done several days in advance, just make sure to refrigerate, covered, and give the lemon creme fraiche a good stir before using since it tends to separate.

If you choose to make the crostini, cut the baguette into thin slices (1/8-1/4") and place on a baking sheet. Brush with olive oil and sprinkle with salt and pepper. Bake for 15-20 minutes and let cool. These can be stored in an air tight container and also made ahead of time, if you don't snack on them and end up eating them all.

To assemble, put a generous dollop of creme fraiche on each crostini. Place a salmon slice on top, and curl the cucumber into a spiral to resemble a rosebud. Drizzle with more creme fraiche and garnish with a sprig of dill. Serve immediately.