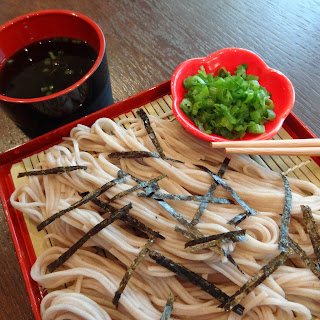 The Japanese have some pretty creative ways to deal with the heat. Many Americans probably have never tried a cold noodle, with the possible exception of cold pasta salad at picnics. So this dish may seem novel to you, but I urge you to give cold noodles a day in court. Zaru soba combines cold noodles with a zesty dipping sauce that is easy to make and easy to eat in the summer's heat. The name "zaru" refers to the bamboo baskets that the noodles are traditionally served in.

Since Southern California pretty much is always hot, I love this dish year-round but it is especially refreshing during the tail-end of summer. Last week seemed like fall was upon us; the weather was the epitome of autumn sweater weather. So naturally, as soon as I start dreaming of hot cocoa, this week is back to sweltering. Sounds like a great time for some zesty and cool zaru soba!

Soba noodles are thin Japanese noodles made from buckwheat, which is very nutritious. Unfortunately, the cheap soba noodles are usually made mostly with wheat since it's cheaper. Believe me, you will notice the taste difference in the inferior noodles. Mr. Mochi and I both agree it is better to pay a couple extra dollars to have real earthy-tasting soba.

Maki from JustHungry has some great topping ideas on her blog, but I usually just stick to finely chopped green onions to go with my soba, with maybe some shredded nori. If you like things spicy, wasabi is a must. 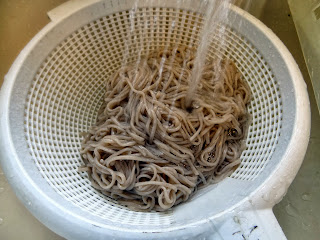 For the dipping sauce (mentsuyu):
The mixture above of soy sauce, mirin, and sugar is called kaeshi, which we will dilute with dashi to make the dipping sauce base. These quantities can be doubled or tripled and the kaeshi can be placed in the fridge, where it can be stored for months. I use kaeshi in the last recipe as well.

Combine the kaeshi with one cup of dashi to make the mentsuyu, and put in the fridge to chill. This can be done the day before if desired.

For the noodles:
Heat a large (about 4-6 quarts) quantity of water to a boil. Place the noodles in the water and return to a boil. Rather than a full rolling boil, you want more of a gentle boil or even a simmer. Depending on how thin your noodles and how hot the water, the noodles will be done in 5-8 minutes. Noodles should be cooked through rather than al dente, but don't let them overcook and become mushy.

Drain the noodles into a colander in the sink. Using cold water, rinse the noodles until cool enough to handle. With your hands, gently scrub the noodles under running water to remove the starches left after the cooking process.

To serve: Drain your freshly scrubbed soba and place on a serving plate, or ideally a bamboo basket or tray. Put your dipping sauce in cups (ramekins and small bowls also work) and serve with the green onions, wasabi, or any other desired toppings. 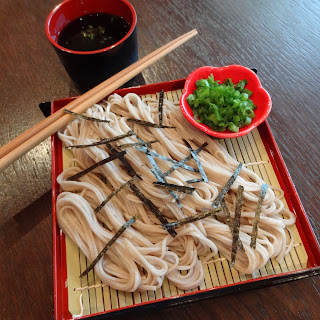