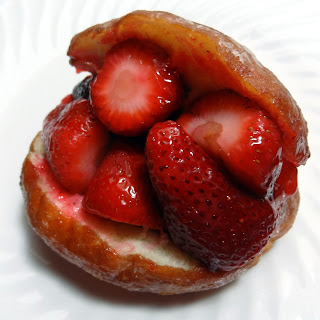 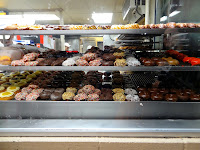 He could undoubtedly make more money by serving these creations year-round. 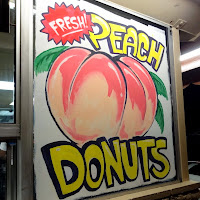 Even if the quality of the strawberries wasn't the same, they would still sell. Crunchy, flavorless fruit imported from another country would probably make him more money than sourcing from local California farms, but it is obvious he would rather make less money and produce a superior product. I believe it's obvious that the Donut Man Jim Nakano cares about shun, cares about the season's effects on something as mundane as a donut, and the resulting near-hysteria surrounding these doughnuts shows that it is the key to Donut Man's longevity. Nakano has been in the business since 1974.

For the record, however I applaud the seasonality of Donut Man's specials, they aren't always my favorites. Don't get me wrong, I love the strawberry and peach donuts, but they are hard to eat. If I can sit down with a fork, they are the doughnut to beat (all those more coordinated than me can laugh). But when I'm scarfing a doughnut in between patients, I turn to the maple bar or the tiger tail. The maple bar is so soft, the maple glaze is not too saccharine-sweet, and it's a donut I can actually eat one-handed. Boasting a swirl of chocolate, the tiger tail is a glazed foot-long twist. I love that the glaze is never slimy or gloppy, something that I usually note and hate in doughnuts like Krispy Kreme.

I hate when things are over-hyped, so for the record, these are doughnuts, not the second coming. But one needs to recognize when a simple thing is done right. If you want a simple donut done right, head to the Donut Man.

And yes, I really did write a mini-essay about shun and strawberry donuts. It's what I do. 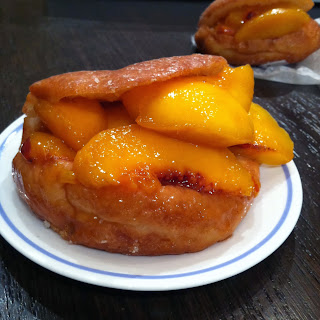