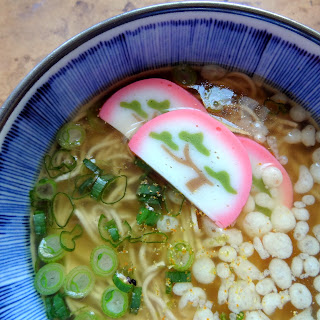 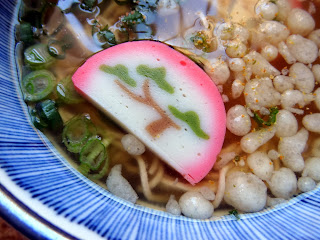 There's no set recipe for toshikoshi soba, you can have it hot or cold, with any topping that suits your fancy. I like it hot, however, because it's great on a chilly night before the clock strikes midnight.

P.S. My favorite part of the New Year preparations is seeing all the decorative kamaboko in the markets (see above). Here, the naruto swirl is replaced with flowers, and the plain red and white half-moon has a bonsai tree.

The mixture above of soy sauce, mirin, and sugar is called kaeshi, which we will dilute with dashi to make the soup base. These quantities can be doubled or tripled and the kaeshi can be placed in the fridge, where it can be stored for months.

Take the kaeshi and dilute with dashi to make the soup broth. This is a rough 1 to 5 dilution of kaeshi to dashi, usually you will do 1:5 or to taste. If you want to double/triple this recipe, just make more, and of course feel free to play around with the dilution. Heat to simmering over medium heat.

For the noodles:
Heat a large (about 4-6 quarts) quantity of water to a boil. Place the noodles in the water and return to a boil. Rather than a full rolling boil, you want more of a gentle boil or even a simmer. Depending on how thin your noodles and how hot the water, the noodles will be done in 5-8 minutes. Noodles should be cooked through rather than al dente, but don't let them overcook and become mushy.

Drain the noodles into a colander in the sink. Using cold water, rinse the noodles until cool enough to handle. With your hands, gently scrub the noodles under running water to remove the starches left after the cooking process. 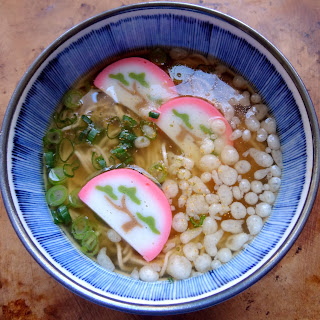 To assemble, divide the noodles into two bowls. Pour the broth equally over the two bowls. Put 2-3 slices of kamaboko in each bowl, along with approximately 1 tbs of green onions and tenkasu each (please save yourself some time and don't measure, just make it to your liking). Sprinkle with shichimi togarashi and serve hot immediately.