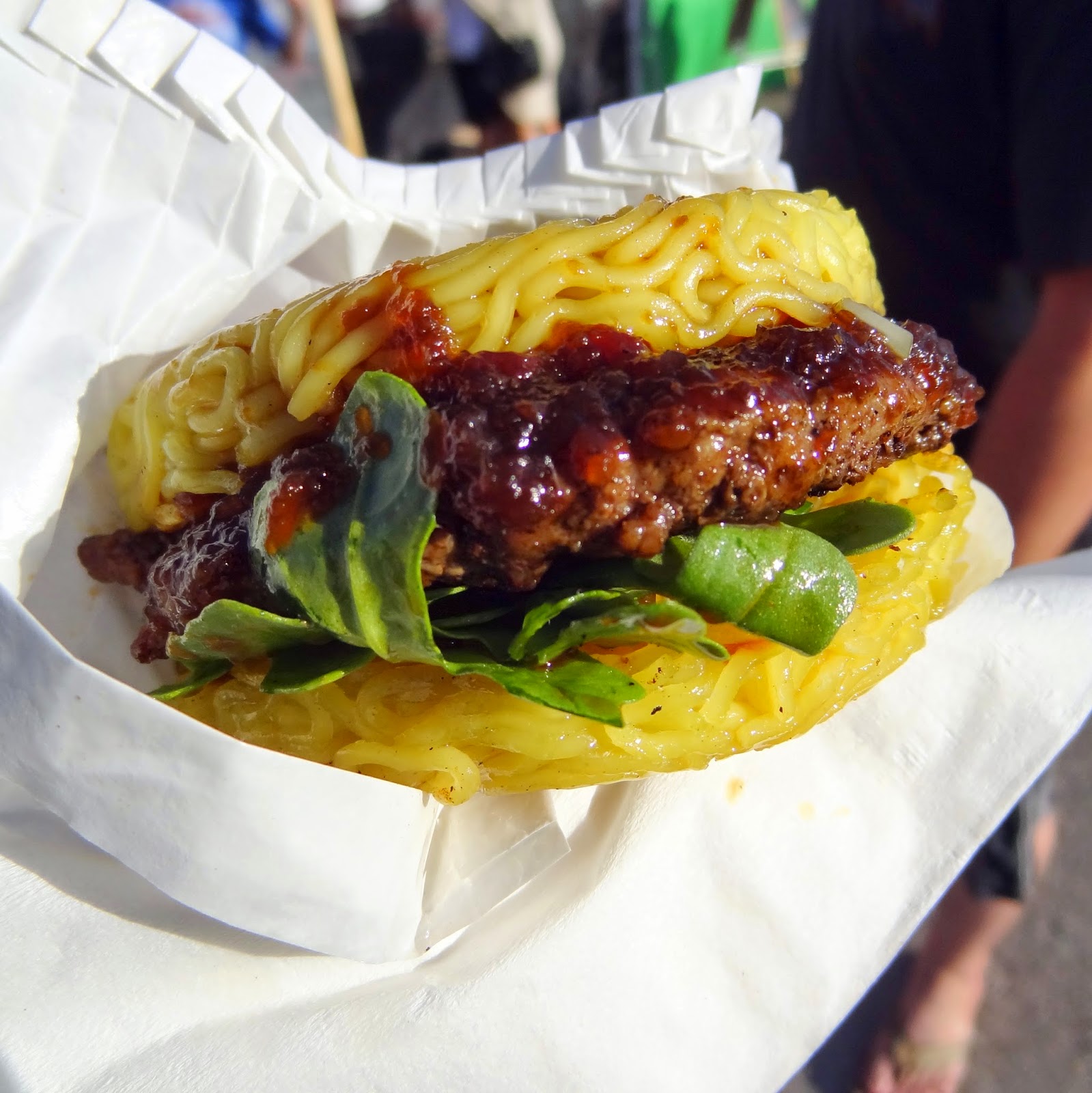 DLTA Night Market definitely was a cheat day for me. I went with one of my friends (Incidentally, she is a damn cool chick and introduced me to Shin-Sen-Gumi back in the day) and Mr. Mochi to brave the summer heat and see what downtown Los Angeles had to offer.

DLTA Night Market was much smaller than the other two night markets I've been to, there wasn't as much real estate for them to work with. A lot of the same vendors from the OC Night Market were there, so I am going to focus my post on the different things we tried!

We tried the Original Ramen Burger (shown above) which was actually tastier than expected! It was one of those things that was so popular I HAD to try it for the blog, but I was pleasantly surprised at how well the bitter greens went with the ramen and the sweet soy sauce based glaze went with the burger. Do I think this will be the future of burgers and buns will be banned? No, but I'm glad I tried it.


To step away from the gluttony, I really like how the Night Market group has non-profit organizations represented at their events. Be The Match, in the above picture (which I admit isn't the best), hosted a free bone marrow registry program. This is paramount in the Asian American community, because a lot of Hapa babies (like me!) face challenges when trying to find a donor because it often needs to be from a person of the same ethnicity. To take myself as an example, they'd need to find a Japanese/German/Welsh/American Indian (Choctaw)/English/etc hapa willing to donate. The search becomes harder because the person must be in a certain age range, and a lot of really mixed hapas are part of the younger generations. I know I might be stepping away from my usual talks about food and heritage, but this absolutely speaks to me and I am so glad there is activism like Be The Match and even Mixed Marrow which specializes in outreach to mixed race people regarding marrow donation and finding matches.

My biggest disappointment of the night was that most of the booths were not ready by the time we arrived. We arrived around 5:30, over an hour and a half after opening, and some booths didn't even have their canopies or signs up, let alone anything to prepare food. It was a huge let-down to not be able to try their items because we didn't even have an estimated time of when they would actually be serving food. After we ate ourselves silly for over an hour, there was even one booth that were finally setting up but had yet to serve a single item of food at 6:30.

To switch to happier subjects: The Night Market group has added on an additional date back at the OC! I'll definitely be there!