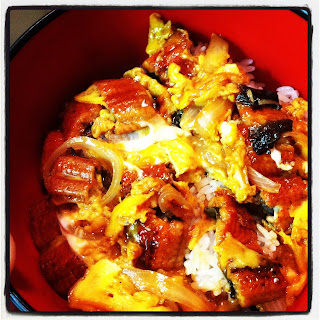 I always tell people if they want to try more adventurous sushi than California rolls, they should try unagi, or freshwater eel. I do this not only because their look of terror is priceless, but because I think it is a very accessible and traditional Japanese meat.  I will explain why I think so, just like I do to the novices to calm them down:

First off, unagi is always cooked. I have no qualms about eating raw fish, but I know this is a big one for beginners. They think all sushi is raw and wriggling.  Second off, it is usually barbequed in a teriyaki style sauce, and served warm. Third, it has a soft and pleasant tenderness to the meat, juicy and never weird or rubbery, unlike tako (octopus).
It is also one of the easiest sushi fish to work with at home. You get it frozen, already basted with sweet sauce, so it keeps well and you don't have to use it right away. And unlike a primo piece of toro (tuna), it is pretty inexpensive. You feeling like having some Japanese home cooking? Just defrost that puppy, heat it up and serve over rice. Tada, you have unagi donburi, or una-don.

Here's my favorite way of dishing up unagi: Una-tama don, or egg eel bowl. Donburi (shorted to -don here) is the name of the heavy bowls theses are usually served in. Donburi is a savory topping put over rice, similar to Flame Broiler here in America. The chain Yoshinoya serves donburi. I love donburi because it is healthy fast food. 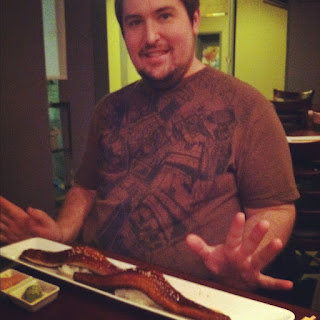 Cut the eel into bite sized pieces. Pour the dashi, soy, mirin, and sugar into a pan and bring to a boil. Put in the onions and cook until translucent. Add in the unagi and simmer for 5 minutes. Pour in the eggs around the eel and onion, do not stir. When the egg is half set, pour mixture over rice and serve.

Here's a picture of my brother in LA's Little Tokyo, where his plate of "Big Unagi Rolls" had arrived. Literally, they put a whole unagi fillet on a little nugget of rice. Two of them! It was comically big.