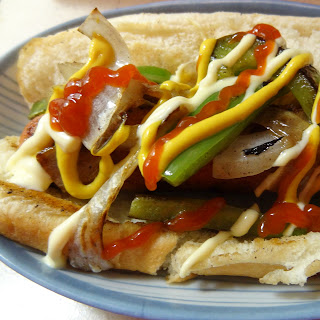 Downtown Los Angeles. A sprawling concrete and steel behemoth of a city that replaced the chaparral to become one of the biggest cities in the world.

Smog, sweat, hopes and dreams seem to settle in Los Angeles. Hope for a better life, dreams of making it big on the silver screen. While L.A. shines as a beacon of light for others with its glittery image, most locals know it as the place they toil and trudge day in and day out with the skyscrapers watching overhead.

I know Los Angeles as the place I went to college. Unlike USC, UCLA is in with the glitter. Bordered by Beverly Hills and Bel Air, UCLA resides in the hoity-toity Westwood area. Think Pinkberry and vegan cafes, posh shops and brand name shoes; a cab ride away from Rodeo Drive and Sunset Strip.

I always contrast that with going to my mother to the downtown districts. It is loud, dirty, and wonderful. The flower, fashion, fabric and jewelry districts are filled with people of all walks of life doing business, striking deals, and making friends. My mother would always bring presents for her favorite shopkeepers, who would always be glad to see her and haggle prices. She spent the most time in the fabric district and I loved running my hands along the rows of fabric bolts: silky satin, rough corduroy, and gauzy silk.

Walking down the gritty cracked pavement that still reflected the sun too bright despite the June gloom, I would always steal a peek at the street food. Catering to mostly Latinos, the fruit the carts peddled is always what tempted me the most as a child. The jewel colored spears of fruit seemed to sparkle; watermelon, papaya, and mango sang out to me. I wanted whatever they were sprinkling on the the fruit along with lime and eating with their fingers, the juices running down their fingers and faces. Little did I know it had cayenne pepper, and I probably wouldn't have cared for it too much as a child.

Now that I go there as an adult, the fruits aren't as captivating to me as the most infamous L.A. street food, the Street Dog. Also known as Danger Dogs, L.A. Ghetto Dogs, or Dirty Dogs, you can smell them before you spy the cart. A heady mixture of fajitas and bacon wafts over the crowd of shoppers, leading you to a vendor's grill. Thick hot dogs are spirally wrapped in bacon, grilled to crispy juicy perfection, then topped with grilled onions and peppers and your choice of condiments that range from the typical ketchup/mustard to mayo and pico topped with a roasted jalapeno. 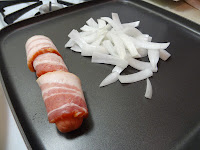 Ironically, the most iconic Los Angeles street eat is illegal. Apparently local health codes for street vendors won't allow bacon, and hot dogs must be steamed or boiled, not grilled.  Unfortunately, there is no going back, most consumers look for a grilled bacon wrapped hot dog and vendors are risking fines and jail time to make a living supplying that demand. 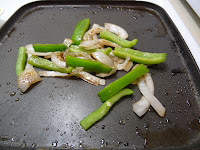 Since not all of us are willing to drive to downtown every time the craving hits, here's how to make the delicious dogs at home, with no legality issues.

Wrap the bacon spirally around the hot dog. If you have toothpicks, it might make it easier to secure the bacon, but they will stick without them (I didn't have any), but you have to turn the hot dog carefully to keep it from unraveling. Place on a grill or griddle pan over medium heat and cook, rotating 1/4 turns every so often until the bacon is cooked through all around.

Meanwhile, place the sliced onions alongside the hot dogs and grill until starting to color. Mix in the sliced bell pepper and cook until soft. You might need to remove the mix before the bacon wrapped hot dogs are done, because the veggies will cook much faster than the bacon.

Lightly toast the buns by opening them and setting them open side down on the griddle/grill for about 45 seconds. Place a bacon wrapped hotdog on the bun, top with the onion/pepper mix, and drizzle on your choice of condiments. If you have a roasted jalapeno, plop that sucker on. Serve immediately.

I'll have to work on a recipe soon for the cayenne and lime fruit spears.
Posted by Miss Mochi at 11:26 PM