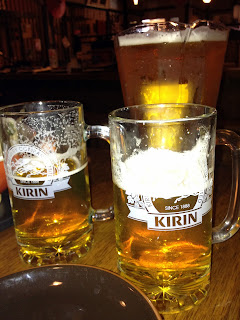 An izakaya (居酒屋) is a Japanese pub that serves food as well as drinks. Originally, an izakaya (which literally means I="to stay" and sakaya="sake shop") was just a place that allowed you to buy and drink sake on their premise.  Since then, it has evolved into a drinking place that usually has an extensive menu of my favorite types of Japanese food: Japanese home-style soul food. Or at least that is what I think of izakaya food as: the type of food you eat at a summer festival, at home on the weekdays, or simple comfort food. Everything you want to eat with a cold beer, good friends and good conversation.

Izakaya menus usually have a lot of small plates, encouraging you to order a string of different nibbles to share while downing a pint. Grilling skewers of meat (yakitori), fried chicken, croquettes (korroke), and rice balls (musubi) are typical fare.  Nasu dengaku, a plate I've already touched on, is a common dish found in izakayas.

Unfortunately, here in America it is much more likely to find a sushi bar than an izakaya, or perhaps a teppanyaki place where the food is secondary to the chef's antics. Changing the Japanese American dining scene is places like Honda-ya, a yakitori izakaya that is introducing the United States to the wonders of Japanese pub food.

Honda-ya has several restaurants all in Southern California: Tustin, Little Tokyo in Downtown L.A., City of Industry, and Fountain Valley.  Their newest outpost is in Fullerton, just a couple blocks away from the Mochi's apartment.  With Mr. Mochi, my brother and their friends in tow, I went to check out the new Honda-ya. This isn't really a review for review's sake, but trying to highlight a different type of Japanese American restaurant.

Izakaya Honda-ya specializes in charcoal grilled yakitori, but it has a huge menu outside of that. We immediately ordered a pitcher of Kirin Ichiban ($15) in which to better pour over the menu. One thing we really liked was the cooling core in the middle of the pitcher to keep the beer ice cold while waiting to be poured, especially good if you wanted to split a pitcher in a smaller group. Along with frosty glasses of beer, we got a tasty sampling of tsukemono: spicy cucumber pickles. They also have a good selection of sake, different beers, and shochu cocktails called chu-hi.

Mr. Mochi, as I knew he would, spied the festival food takoyaki ($4.50) and hastened to order his favorite. Second only to katsu-kare, he loves the molten hot pancake balls filled with bits of tempura and octopus and covered in tangy Japanese tonkatsu sauce.  Mr. Mochi appreciated the Japanese mayo served here, which is much tangier and richer than the usual American mayo served with some takoyaki, as well as the proper crisp exterior and just cooked interior. These certainly did not disappoint, and the other boys liked them so much they got a second order. I am pretty sure Mr. Mochi will be getting me a takoyaki pan for my birthday so I can make them at home, that's how much he enjoys this dish.

Wanting to try their specialty, we also ordered a nice variety of yakitori skewers ($1.80-4.75). Unfortunately, some (most) got devoured before I could snap a picture.  Standouts include the beef that was topped with green onions and chili daikon, the white meat chicken with wasabi, the pork belly, tsukune which is chicken meatball, and the chicken leg with naganegi.  I was very impressed with the white meat chicken, because it is very easy to dry out white meat, especially when grilling, but the skewer was perfectly juicy.

We also ordered a variety of other dishes. The ika maru ($5.95), or grilled squid, was a nice textural contrast between its crisp outside and chewy innards and is another typical festival food. Honda-ya did well by this dish, not overcooking it and rendering the squid too tough. We did find ourselves dipping it in sauces from other dishes, however, since the preparation is pretty simple.

The agedashi mochi ($3.95) was good, but I think I prefer the original agedashi tofu better. The mochi chunks were too big, so the fried parts were delicious, but the majority was slippery melting mochi, and would not absorb the tasty tempura dipping sauce. I would make this at home with bite size pieces of mochi.

Rounding out our selection was the teriyaki salmon, yaki onigiri (grilled rice ball), and ramen. I loved the grilled rice ball, a homey comfort food, which came with a nice assortment of tsukemono for a very reasonable $2.95, but I didn't try the salmon or ramen so I cannot weigh in on their merits. The boys ate them too fast for me to sample, so I am assuming they were good. 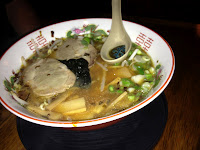 If you notice, none of us had sushi or sashimi. Honda-ya does have a sashimi and sushi portion of the menu, but that is not what we wanted to try. After all, honda-ya is an izakaya, not a sushi bar. I am sure that the sushi and sashimi are good, but to me that is like going to a steakhouse and ordering a burger; it may be serviceable enough to put on the menu, but it is not what they focus on.  After all, Americans still associate Japanese cooking with raw fish, and I am sure if they did not have it on the menu, some would be confused.