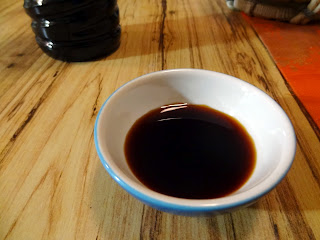 You might think that soy sauce needs no post. True, shoyu is present at every asian food restaurant, ubiquitous everywhere from Panda Express to your favorite sushi joint. But there are a lot of different types of soy sauces, and I'm here to tell you about them.

First, a little bit about shoyu in general.  Shoyu was first reported to be used in China in 2000 BC, and spread to Japan in the 7th century along with Buddhism. It is the liquid product of fermented soy beans, wheat, salt, water, and some sort of yeast to get the fermentation going.  The fermented mix is squeezed and the run off is soy sauce, which gets aged then bottled. Nowadays, there is also a chemical process involving acid-hydrolyzed soy proteins that I won't even pretend to understand, other than that the whole soy bean is not used so it ferments faster and is used in most mass produced soy sauce.

Now there are tons of different types of soy sauce, as every country has its own way of making it. For example, a type of Indonesian soy sauce is thick like molasses, and in Brazil they use corn rather than wheat as the grain. But let us talk about the Japanese styles, since those are the ones I use in my pantry.

Koikuchi is the granddaddy of all shoyu. I've read that over 80% of all Japanese soy sauce production is koikuchi (thank you Wikipedia!). It is the shoyu you are probably familiar with: dark, salty-sweet and thin. It is from the north part of Japan, and is so well known here in America it won't be labeled as koikuchi but simply as soy sauce. If you have one shoyu in your house, have a good brand of koikuchi that you like the taste of. I prefer Yamasa, along with Kikkoman it is the easy to find brand here. I've tried American brands of soy sauce, sold in grocery stores, and they taste funny to me and my family. If I do not specify a type of shoyu in a recipe and simply say "shoyu" this is the soy sauce I want you to use!

Second is light soy sauce, called usukuchi. Contrary to what people think of, it isn't less salty than normal soy sauce, that's called genen or reduced sodium soy sauce.  Usukuchi is actually saltier than koikuchi and is used traditionally when you want soy sauce that won't turn your dish darker, like tamagoyaki.  It originated in the old capital of Japan, Kyoto, where the imperial cooking was very fussy about this sort of thing.

Last but not least is tamari shoyu. Tamari is dark and and thicker than koikuchi, and originally was the byproduct of miso production. It makes a beautiful reddish brown color for teriyaki glaze, but it is usually used for dipping. It is popular for people with gluten sensitivities because it can be made entirely with soybeans and therefore is wheat free, but you have to check the label to see if it is made this way, because it can also be made with wheat.

An interesting note on soy sauce and wheat sensitive people: the website Soya had a page where they talked about gluten in regular koikuchi, and independent lab work showed that the gluten was eaten up in fermentation and therefore could be considered gluten-free.

Now there are plenty of regional soy sauces, like shiro shoyu that is even lighter than ususkuchi, as well as flavored soy sauces, but I wanted to just introduce you to some of the major players.