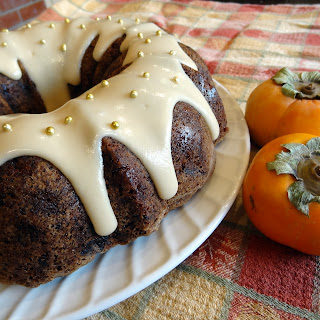 It's kaki season again! Kaki (柿) is the Japanese word for persimmon. According to the Tokyo Foundation, kaki are one of the few fruits native to Japan, however more sources state that China is where it originated from. Either way, kaki have been cultivated in Japan since at least the 7th century. Before modern sugar, honey and kaki were the main sources of sweets in Japan, and kaki are omnipresent in Japanese art and ancient culture. The dried persimmon, hoshigaki, is a very rare treat from Japan that was presented to the Edo shogunate, as well as later foreign visitors such as Herman Hesse. Even to this day, hoshigaki are a rare treat only available in small quantities in the fall, due to the labor-intensive production.

There are two basic types of kakis: the squat Fuyu that can be eaten crisp like an apple or the heart-shaped Hachiya type that is ripened until jelly-like inside. The Hachiya cannot be eaten hard because it is very astringent unless fully ripe.

My family is fortunate enough to have access to home grown persimmons. My great uncle John has a fuyu kaki tree, and around this time giant bags make their way from my grandmother filled with persimmons. As a kid, my mom would cut one up to accompany oatmeal for breakfast. Their natural spicy sweet flavor combined with their juicy crispness will always remind me of fall. 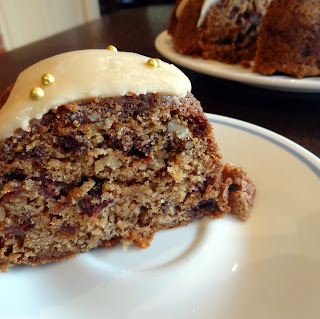 Once, my mom gave us an unripe persimmon. I will tell you right now, it is a life-scarring experience. They are inedible, with the astringency pulling every drop of moisture from your mouth. The closest experience that I can think of is getting the wind knocked out of you. Just like that, you are left gasping and gaping like a fish out of water.

I wanted to make something with my share of kaki this year, besides just eating them sliced like apples.  Despite not being a very seasoned baker, the Food Librarian's bundt recipe just spoke to me. I HAD to make this bundt, despite having to raid my mother's pantry for all her baking spices and going out to buy a bundt pan. Adapted from a 70's recipe from Sunset Magazine, I hope you will love this spice bread with the nuggets of kaki melted into it and walnuts providing a nice contrast.

I kept the original teaspoon of ground cloves, but you might halve it if you find that spice too intense.  My mother doesn't do a terrible amount of baking so her spices were several years old and I figured that they needed quantity since their potency might have faded. I am not the biggest fan of raisins, so I replaced them with dried tart cherries. My second choice besides dried cherries was fresh pomegranate seeds, so feel free to play around with this. I wanted something tarter to keep everything from becoming too sweet, especially since I went with a glaze rather than powdered sugar.

More than anything, I was amazed at how simple this was to make! I am so excited to try out some more bundt recipes! Mary the bundt-a-holic, on her Food Librarian blog, has tons of fun ones that I'm now itching to try!

Preheat oven to 350 degrees Fahrenheit. Toss the diced kaki with the baking soda. Whisk together the flour, salt, baking powder, and spices. Cream together the butter and sugar until light and fluffy, then add in the eggs one at at time until just combined. Add in the lemon juice and vanilla extract, then stir in the kaki gently. After the kaki are incorporated, slowly mix in the dry ingredients until just combined. Fold in the walnuts and cherries and then pour into a buttered and floured bundt pan.  Smooth the top of the cake mixture, and then place the bundt pan in the middle of the oven directly on the rack. Bake for 50-60 minutes until tested mostly clean with a few crumbs. Let cool for 15 minutes, then invert on a wire rack and cool completely before adding a glaze or powdered sugar. I decorated mine with gold dragées (also lifted from my mother's pantry). To make the glaze, whisk together the sugar and maple syrup into a stiff glaze, then pour over the top of the cooled bundt. 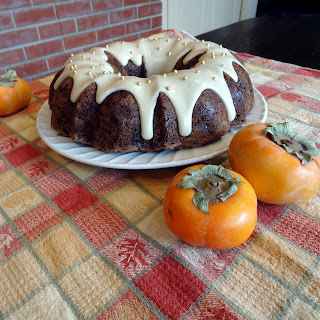