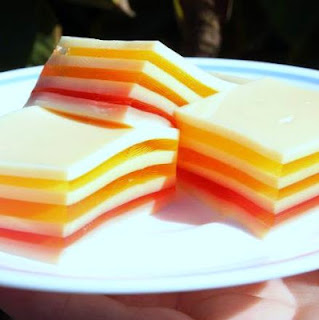 For Thanksgiving this year, I was in charge of a few things. My mother took advantage of my close proximity to borrow my oven for dishes. Everyone know that the turkey takes up a ton of room in the oven, so having access to another oven freed her cooking schedule up quite a bit. I was in charge of heating up the three stuffings, brie en croute, and the seville marmalade glazed sweet potatoes.

However, as detailed in my bacon gravy and biscuits post, my oven is one foot in the grave. I solved the problem of not heating up and I've had good luck recently baking cakes, but apparently shoving in an entire oven full of dishes straight from the fridge was too much for it. The oven temperature plummeted and slowly limped back up to the proper temperature, which means that my dishes took forever to heat up!

I was so frazzled I nearly forgot my jello in the race to the celebration, with around 9 dishes in tow, some very very hot (wrapped in foil, then beach towels to keep warm), as well as a boyfriend and a dog way too interested in this whole festivity. I thought her eyes were going to pop out of her head the entire time, she was begging so hard.

This jello recipe definitely takes some time to make, but it is pretty hands off, as most of the time is spent chilling the layers.  This is always requested by my mother, and I knew that her flower arrangements were in fall colors, so I chose red, orange, and yellow to complement them.

3 three ounce boxes of jello (one in red/pink, orange, and yellow for fall)
2 pouches of Knox unflavored gelatin
1 13 ounce can of sweetened condensed milk
boiling water

Milk Layer: Mix the condensed milk with two packets of knox unflavored gelatin and 3 cups boiling water. Measure out 3/4 cup and pour into a 9x13 inch baking pan. Make sure your fridge is level, and place in it for 15 minutes.

Colored layer:  Mix half of one of the jello boxes with 1/2 cup boiling water to dissolve. Add in 1/2 cup cold water.

Alternate the milky layer with the colored layer, letting the pan sit in the fridge for approx 15-20 minutes, or until set enough to pour on the next layer. I find the best way to ensure the perfect temperature for each layer is not to mix up the jello until you are chilling the layer before it. That way it has 15-20 minutes to reach a good temperature, but not so long that it gets too cool and starts setting. The milky batch has 3 cups of boiling water, so usually it does not get too cool, but if it seems like it is getting too cool, you can stick it in a water bath to keep it warmer.