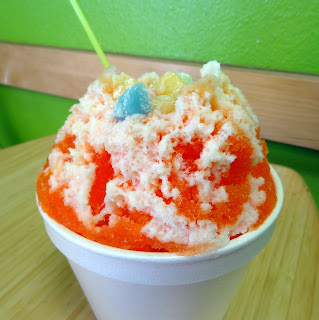 Hawaiian shave ice is one of my favorite treats. I was lucky enough to visit Hawaii several times during my youth, and it is still one of my favorite places I've been to. Probably because I loved being able to go to the beach and get a musubi right there on the shore, unlike the uninspired fries and chips here on Southern California beaches. Walk into Costco, and you can pick up Japanese snacks you'd need to hunt down in a specialty store here on the mainland.

Shave ice is not uniquely Hawaiian. It can be traced back to Japan, where it is called kakigori (かき氷). Unlike a snow cone, the ice is not crushed but shaved into fluffy clouds of snow that absorb flavoring rather than being coated in it. Originally it was cut with Japanese swords brought over to Hawaiian plantations, but today it is cut with a machine. It melts in your mouth, instead of being crunchy.

Topped with condensed milk, azuki beans, or even mochi, it often has a scoop of ice cream or anko at the bottom both in Japan and Hawaii. My mother, who loves ice cream and shave ice, would often take us to the local shave ice parlor just down the street from us. Unfortunately, the shave ice place closed when I was still in grade school, and the last time I was able to enjoy shave ice was then.

Then my mother recently tipped me off to the new shave ice in town: Oahu Shave Ice! Of course, being the icy treat obsessed lady that she is, it already had her stamp of approval. I had to check it out.

You can get a shave ice and chose your own flavors, or pick from one of their suggested combos. Think like Coldstone Creamery. They also offer "Oahu style" which adds a scoop of ice cream and a topping. I definitely suggest getting it with the toppings and ice cream.

I must say I was blown away by the quality of their ice cream. This was seriously smooth and fluffy, melt-in-your-mouth cream that was not the least bit icy and packed with flavor. The coconut pineapple boasted lots of coconut threads and chunks of pineapple that weren't too big to be cumbersome. I would go again just for the ice cream, it is definitely not a second-thought addition to Oahu.

The P.O.G. flavor was wonderful, with acidity and sweetness making sure that I didn't get tired of it, as some syrups can overdose on the sugar. I could eat condensed milk off a spoon so this may be biased, but I highly suggest getting it. Not only is that stuff addicting, it did add a richness to the shave ice.

Mr. Mochi had the Root Beer Float, which has root beer and vanilla flavored shave ice with vanilla ice cream. It's topped with something called a "snow cap" which I always understood as the name for condensed milk topping, so I was confused. They identify snow cap as a vanilla cream topping and it looked like condensed milk, but was less thick and vanilla flavored. Mr. Mochi enjoyed this, I'm not the biggest fan of root beer flavor.

My mother's favorite is their Choco-Chata, where a base of chocolate ice cream is topped with horchata shave ice that has been sprinkled with cinnamon sugar and condensed milk. She always gets it with vanilla ice cream, so technically it's  no longer a Choco-Chata. Still delicious, and the nice thing is that it is a little more complex than say, a normal snow cone. It is also not too obnoxiously sweet like these treats can be. (See last picture)

The next time, I made my own creation: li hing mui flavored ice with rainbow sherbet ice cream, all topped with a generous drizzle of condensed milk. I was kind of dissapointed with the li hing mui, I felt it could have been more tart and salty. It was very one dimensional for such a flavor that is usually packed with sweet, salty and sour. I would have punched it up with some li hing mui powder on top, but I can see that that might end up being too much for some palates.

Mr. Mochi had the Apple Pie with apple ice, graham cracker crumbs, caramel, cinnamon sugar and vanilla ice cream. He was impressed, saying that it tasted just like apple pie. He did say that that next time he would get a smaller size, so the toppings to ice ratio was higher, because after all the toppings were gone it was just plain apple. Not bad, by any means, but not as amazing.

Overall, I loved their shaved ice. I would stick with a good combo of sweet and sour flavors, because I feel that sometimes shave ice in general can get too sweet for me.
Their decor was fun, all the tables were shaped like surfboards! The staff was very nice and very efficient, and not pushy at all about letting us gape open-mouthed at their 50+ flavors. One of the staff loved my tattoo and asked to see it, which is always nice when they are so friendly and talkative. Both locations, one in Fullerton and one in Yorba Linda, are worth a visit!