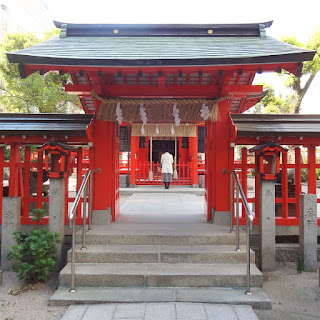 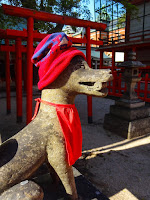 Here in Fukuoka, it was just my family and I enjoying these shrines with a few other people. They weren't as huge or impressive, but intimate and peaceful. One, Suikyo shrine, was hidden between two high rise building, but with a beautiful koi pond and fox statues wearing knitted beanies to keep them warm (see above the break). I loved how it was in the traditional shinto red, and radiated tranquility in the middle of the city.

Another, my favorite shrine of the whole trip, Kushida-jinja, was found tucked away behind some industrial buildings in the heart of the city. It showcases an enormous matsuri float that people will carry and race with in July for the 750-year-old Hakata Gion Yamakasa (博多祇園山笠) matsuri. We were able to get lucky fortunes from the shrine and just take in the grounds without a single other tourist group.

I also got to check out Japan's famous department store basements in Fukuoka, which are insane labyrinths of food. Wagashi, produce, fresh seafood, marbled meat cut paper thin, all this and more is tucked below the street level. I think my favorite part was all the store clerks, they were dressed up fabulously and greeted everyone who walked by. There were French macarons with leopard print shells, cherry blossom manju, a chef making a roll cake with fresh fruit, and the prettiest cakes I've ever seen.

Some of the regional foods you can find in Fukuoka: Hakata ramen, mentaiko, yuzu kosho, and motsunabe.

Hakata ramen is my favorite type of ramen, rich milky-thick pork bone broth called tonkotsu with thin chewy noodles, which here in the states you can find at ramen places like Shin-Sen-Gumi and Jinya Ramen. Mr. Mochi loves Shin-Sen-Gumi, and was very disappointed that I didn't get to try Hakata ramen in Fukuoka because my relatives insisted on feasting us at fancy restaurants.

Mentaiko is marinated fish roe (commonly pollock or cod) that is often a filling for onigiri (rice balls) but also used as a side or topping. I happen to love karashi mentaiko,or spicy mentaiko, and one of my favorite hapa uses for it is to mix it with Japanese mayo as a dip!

Motsunabe is a dish that I didn't get to try, but I certainly saw advertised during our trip. Motsunabe is a nabe, or hot pot, made with beef intestines, miso, chili peppers, garlic cabbage, garlic chives, and usually finished with champon noodles. Some locations of Shin-Sen-Gumi carry this dish here in California, and I will have to try it either there or back in Japan!

What will I be featuring for Fukuoka and Kyushu in general? Two recipes, one using mentaiko and another using yuzu kosho, another regional food! I also talk a bit about the local alcohol, shochu, and have fun with a Kyushu-style Bloody Mary, and end with a restaurant review! Stay tuned, or use the list below!