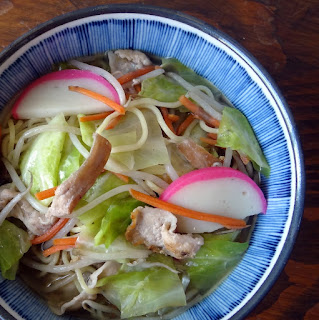 Yawatahama-style Champon is considered the beloved soul food of Yawatahama, and an important part of their culture. Their city mascot, Hamapon, actually carries around a bowl of champon and his name is a portmanteau of the last letters in Yawatahama Champon.

Yawatahama is a small town (population around 40,000) but it has over fifty champon restaurants, to give you a bit of scope on how popular this dish is. How did Champon get so popular, and what the hell is it? Champon is a noodle dish that traces its roots back to China, just like ramen does. There's two different theories on how it got so popular in Yawatahama and both theories trace back to the fact it is a port city. Either directly from China, or from Nagasaki, another important port city, Champon came over on those trade ships and won Yawatahama's heart and soul in the 1950s.

Champon is unique in that you boil the noodles directly in the broth, unlike ramen. Also different: it also includes a lot of veggies not typically seen in ramen. The whole dish is stir fried, so it starts looking very much like a Chinese dish of stir fried veggies and meat, until the broth and noodles appear and it goes in a very different direction. Overall, it's a unique dish that I had to try and bring to you.

Yawatahama-style champon differs from the more well-known Nagasaki-style champon in subtle ways. The broth is lighter in the Yawatahama version, the noodles are thicker, and the toppings tend to have more seafood. Even then, there is a huge variation in broths and toppings, as every champon shop has its own interpretation of the dish.

Check out this video on Youtube that introduces Hamapon and shows you several different Yawatahama restaurant's champon.

In my photos I neglected to take any pictures that highlighted the shrimp in this dish, but rest assured they are there. They all were at the bottom and being hungry I forgot to make sure to style one on top. Feel free to substitute with whatever fresh seafood you want!

I made sure to have my grandmother taste test this recipe and she gave it two thumbs up as Yawatahama-style champon. 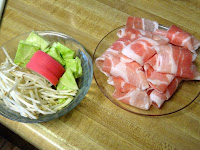 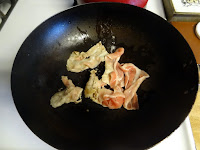 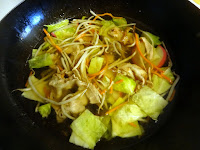 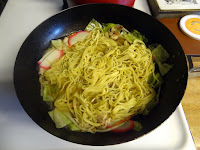 *Try to find the widest you can find, or consider even using spaghetti noodles I won't judge!

Add in the carrots and cabbage, and stir fry until the cabbage has just begun to lose some of its crunch and everything is covered in oil, less than a minute.

Mix in the bean sprouts and kamaboko and then pour in the broth ingredients. Bring the broth to a boil and then drop in the noodles. After about one minute of boiling the noodles, remove from head.

Divide into two bowls and serve! I find the easiest way to avoid making a mess is to divide the noodles and such up into two bowls first, then pour the broth into them. 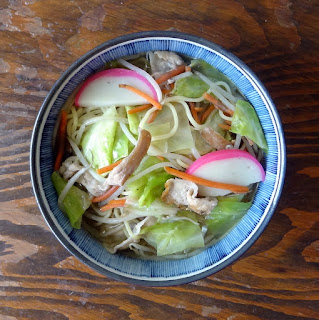