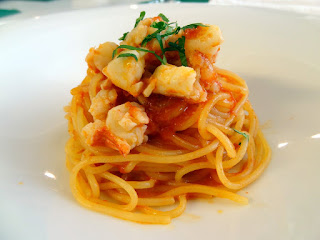 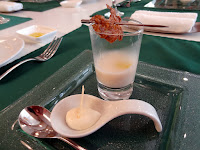 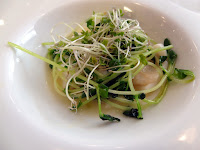 The second course was a sprout salad that I also enjoyed. I've written recently on how much I'm not a fan of both spaghetti and salad, but this one was easy to eat and not bitter at all like some sprout salads can be. This one was very light and fresh! 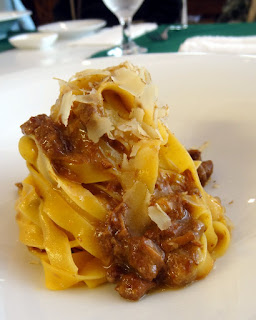 The main course of pasta we tried the pork pasta (see right) and the ebi (shrimp) pasta (see first photo). I wish I spoke enough Japanese to ask them what sort of sauces they were dressed with besides the obvious that the ebi was tomato-based. Both pastas were cooked exactly al dente and I thought the shape of the pasta was very fitting as the wider pasta complimented the pork very well, while the thinner pasta for the ebi pasta's sauce also went well.

After that, another tiny course of fresh strawberry jam and cream on a spoon.This was not even a mouthful, the whole thing was about the size of the tip of my thumb! It was almost like a sweet and tangy palate cleanser before dessert was served. 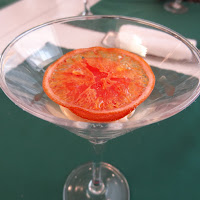 Lastly, but my personal favorite, was the dessert course. They brought out a mikan dessert! I was so happy to have something traditionally local displayed in such a fantastic manner. In a martini glass, they layered cake crumbs, mikan ice cream, and a mikan granita (or perhaps sherbet) sandwiched between two amazingly thin slices of dried mikan. It was cool, tasty, trendy and different while paying homage to what was in season and locally produced.